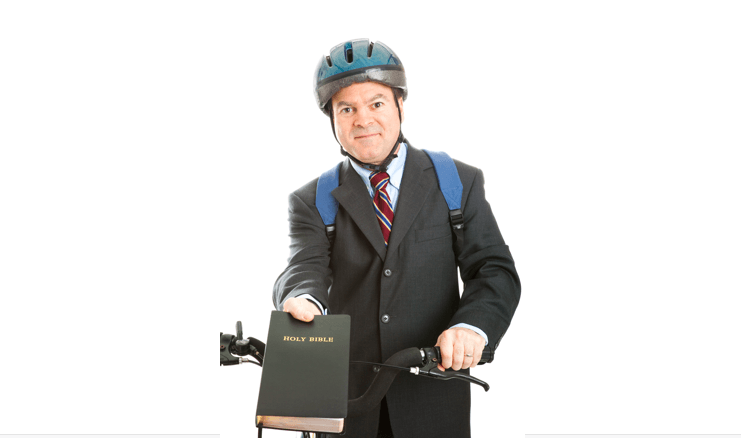 You can learn useful entrepreneurial skills in all sorts of odd places. My training ground was the streets of Sweden, going door to door as a teenage evangelist. What I learned there was resilience, persistence, and self-belief. No matter how often I got turned away, no matter how badly I crashed and burned, I always found the strength to keep going on to the next house and keep pitching. Since leaving the religion, that mindset has stayed with me, and it’s been a core element in the way I approach business.

Deal with rejection, no matter how brutal

I was brought up in a highly evangelical community, and even as kids, we were expected to go door to door, proselytizing. As you can imagine, most people didn’t want to listen to a strange teenager preaching at them. Most of the time, if they even opened the door to us, they would politely tell us to get lost.

Occasionally they would hear us out first, and some would even engage us in a brief discussion, but usually, we’d barely get past the first sentence of our carefully prepared speech. Some people will take your literature, and you know they’ll probably throw it into the trash, unread, as soon as you’re gone.

Often they’d literally slam the door in our faces. Sometimes they’d respond with verbal or physical abuse. I had water thrown at me, I’ve been shoved, and I’ve even had dogs set on me.

Whatever happened, we had to stay polite and move onto the next house in the street, hoping for a better result. We could be visiting ten or more houses an hour, sometimes as many as a hundred in a day.

Most days, we didn’t make a single convert. But the next day, the next week, the next month, we’d go right back out and do it again, because we believed so passionately in what we were offering — literally, we thought we were saving lives — that it was worth any amount of failure to get those few successes.

If anything, the worse it got, the more abuse we received, the more determined we became to do better. We took comfort in Bible verses, such as “Happy are you when people reproach you and persecute you.” Rejection became a form of validation. It was crazy, but that’s what we did, day after day, no matter what. On the other hand, every new convert was a cause for joy and celebration, and that’s what we focused on.

I’m no longer involved with religion, but what I learned in those days is a level of self-belief and determination I’ve been able to bring to my life as an entrepreneur. I define myself by my successes, not by my failures, and that has helped me keep going when I would otherwise have given up.

As an entrepreneur or tech evangelist, you have to get used to hearing that dreaded phrase “No thanks, we’re not interested,” over and over again: when you’re pitching to investors, when you’re an unknown trying to break into an established market and make those early sales, or when you’re trying to partner up with existing players. It’s demoralizing. It’s enough to make you give up and go back to working a regular job with a regular paycheck.

And that’s exactly what happens to a lot of startups: they get ground down by the constant rejection and the founders quit before they even get started. Over 40 percent of salespeople say that prospecting is the most stressful part of their job.

There are many elements to a successful startup: you have to have a great idea, sufficient funding, good timing, and of course, luck. But none of these will count for anything unless you have the persistence and sheer dogged determination to keep going no matter what. So you’ve already made ten pitches, and you’ve had ten rejections, but you need to go into that eleventh pitch meeting with the same enthusiasm and optimism you took into the very first one. Because maybe this one will be the one. And if it isn’t, then don’t look back — you need to go right on to the twelfth pitch.

Get used to failing — it’s part of the job

Research shows that only two percent of deals happen at a first meeting. 80 percent of sales take five or more follow-ups before they close a deal. But 44 percent of salespeople give up at the first refusal, and over 90 percent give up before they reach that crucial fifth attempt. In other words, fewer than one in ten are prepared to keep trying to make that sale even when it seems futile. But those are the 10 percent who will actually become successful.

The truth is that there’s no easy way to develop this mindset except by failing — and failing a lot. Failure has to happen so often that it ceases to be something you worry about. It has to become something you just shrug off. 51 percent of entrepreneurs say that the best way to learn about being an entrepreneur is just to do it. Whether you succeed or fail, you’ll learn from the experience.

Believe in what you’re selling — if you don’t, you’ll fail

It’s also important to stick to your basic convictions. You can change the way you present it, and over time you learn how to frame your message to bring you a few more converts and not so many slammed doors, but fundamentally, what you’re selling doesn’t change.

Too many entrepreneurs are perpetually delivering the previous pitch. Yesterday’s prospective investor wanted a product with these features or aimed at this market. So you update your pitch deck and business plan overnight, and that’s what you present at today’s meeting, hoping that today’s prospect will want the same thing as the last one — which, usually, they don’t.

Bit by bit, you drift further and further away from your vision, and you’re still no closer to making that deal. You need to stay true to what you fundamentally believe. Otherwise, you lose the passion that makes you authentic and motivated. Without that, you’re just another supplicant asking for money, and that’s not what investors or customers want to see.

Obviously, in business, there’s a time you need to reevaluate your core concepts and you have to be fully prepared to adjust your thinking, or even pivot completely based on new data. But that shouldn’t be a knee-jerk reaction to rejection. That should be a positive response to a deeper understanding of what people actually want, not a negative response to failure. Most of the people you’re talking to don’t know your business as well as you do and their opinions aren’t necessarily well-informed or helpful.

Remember, particularly in the early days, you should be looking for those people who are fundamentally aligned with you and share your vision. They may not be easy to find. It’s like panning for gold. There’s lots of mud, lots of hard work, and very few nuggets, but you have to keep searching for those tiny grains that make it all worthwhile.

Successful evangelism isn’t simply a matter of having a great message. It’s about having the determination to go out and keep pitching to a world that mostly doesn’t care. Once you learn to shrug off rejection and not take it personally, there will be nothing to hold back your enthusiasm, passion, and self-confidence. Then the sky really is the limit to what you can accomplish.

Read next: This travel agency doesn't reveal your destination until your plane takes off