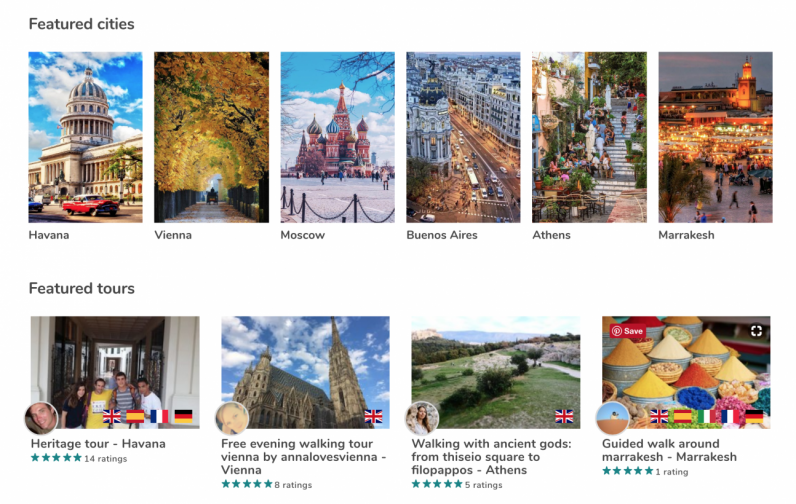 The concept of “free walking tours” is proving to be a big hit with those on a quest for authenticity on their travels. Similarly to traditional walking tours, they usually involve covering the main landmarks of a city while explaining the history and curiosities of the location but in a more fun and intriguing way.

However, as the name suggests, the main difference is that these tours don’t have a fixed price. Alternatively, travelers pay their guides at the end of their trip with a tip. But, tourists are making generation donations to those who sacrifice their time to help others.

As a result, many are turning their tours with a personal touch into a profitable business. It’s not uncommon for some European guides to reach €3000 a single month. The Spanish startup GuruWalk have capitalized on this fast-growing trend, but also set their sights on helping people in need at the same time.

Co-Founder Juan Castillo told that more and more people are looking for free walking tours around the world. But, although European capitals have a good variety of free tours, most of the globe is still without them.

GuruWalk is aimed at helping people in developing countries where residents cannot afford the luxury of launching their own website or expensive marketing budget. Ironically, these countries are the ones with very few free tours visible to the more discerning traveler. Essentially, those who stray from the traditional holiday destinations will seldom find the unique walking tours that they are searching for.

A combination of advances in technology and a seemingly shrinking world is enabling the GuruWalk team focus their efforts where they can add more value. Countries such as Cuba, Colombia, or Peru are great examples where there is an opportunity to help global citizens via travel.

For example, quick thinking locals in Columbia were quick to capitalize on pop culture and the success of Netflix’s Narcos by creating a free tour highlighting the real life of Pablo Escobar. The authenticity of hearing the real stories behind the show first hand by a local Colombian guide is proving to be a big hit with fans of the show.

Equally, the show Stranger Things has also put the city of Jackson, Georgia (called Hawkins in the series) on the map. Fans from all over the world are taking advantage of a local guide who is offering to take visitors to the library, the quarry, the court building, and the police station scenes that were featured in the series.

Locals that had aspirations to work as a tour guide were previously held back by a lack of resources. But, they have now become the disruptors. Since GuruWalk is an open platform, many European citizens have also published their tours on the site too.

The growth in areas that the platform is not even targeting has even taken co-founder, Juan Castillo by surprise. In a recent conversation, he told me how the company started from very humble beginnings.

GuruWalk started operations in March this year, with zero investment in marketing, and just a team of 3 people working from their office in Valencia, Spain.

However, the platform has already reached 75 cities and 300 unique free walking tours around the world in a short space of time. But the metric the team cares about the most is the thankful emails that they receive from their guides from Havana, Medellin or Nepal, letting them know that they are changing their lives and providing a new source of income for them and their families.

It’s easy to see why a startup that disrupts the traditional travel industry and makes a difference to the countries citizens is a big hit with the culturally and socially aware tourists. The so-called peer-to-peer gig economy is now enabling anyone to showcase everything they love about where they live.

In a world of Instagram and Snapchat Stories, it’s refreshing to hear a story that is encouraging visitors think beyond the ubiquitous hop on, hop off bus tours for more enriching travel experiences around the world.