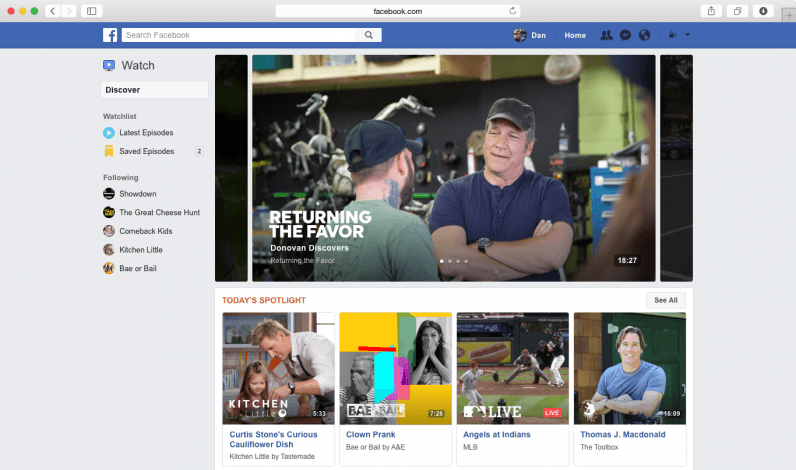 Facebook recently announced the launch of a revamped video streaming service aptly called “Watch.” Despite the hype, we should be careful jumping to the conclusion Mark Zuckerberg and his Facebook behemoth have their sights set on Hollywood.

The real story here is that the service promises users a more streamlined viewing experience and the ability to engage with their community of friends around the content. Ultimately, the Watch viewing experience is what’s groundbreaking, not the programming it distributes.

For modern media companies, the question has always been whether content is king or if products trump all? The right answer is unequivocally: to win in today’s digital world, media companies must innovate the user experience.

Let me explain. I began my career at a big media company transitioning their many printed publications to the online world. It was quite a challenge. While everyone I worked with — journalists, editors, and media executives — recognized the importance of having an online presence, few knew exactly how best to go about it.

My big takeaway was seeing just how differently media and technology companies view innovation. One side believes creatives and content czars should lead the way, and the other that engineers ought to rule and that products determine success.

During my tenure there, it became very clear that the company was completely rooted in content. Creatives — those who wrote, photographed, filmed, etc. — sat at the top of the totem pole. They drove the company agenda. At that time, creatives saw product teams and technologists as backend technicians of the business. Necessary, but not allowed to sit at the big table. The experience of consuming content took a backseat to the content itself.

While this decision produced award-winning journalism, it didn’t empower them and other respected companies like it with the innovation they needed to avoid disruption from new media upstarts. Today, we’re still witnessing the fall-out as traditional publishers struggle to transform into companies that prioritize product development as much as their content production.

In contrast, companies founded in technology often see things in the opposite order. Engineers, programmers and computer scientists are the bedrock of the company and rockstars of the office. Creatives play an important role, but it’s often in support of the work done by product and software teams.

While there are merits to both methods of organization, it’s time to put a stake in the ground. If you observe companies finding success in the post-Internet world, the user experience is the primary driver.

Consider YouTube, the world’s largest repository of online videos — debatably a new media company — didn’t begin as an original content company. Instead, they offered the technology tools and platform for other creatives to share, “like” and spread their content across the globe. YouTube’s exponential success in media circles is the result of focusing not on content itself, but on the user experience. They chose product development over media production.

Sure, some may argue that good technology can only take a business model so far. Eventually all companies, even those product-led, must expand and diversify outside of their comfort zone. In the past several years, Netflix found tremendous success in creating a whole slate of original content. However, they led with and perfected the user experience — the platform and on-demand streaming — and then followed with the creative.

Don’t get me wrong: there are a number of successful companies with a “content-first” approach. However, the companies truly driving innovation and change in the media landscape today are grounded in, and lead with, user experience.

I applied this notion when founding my company and relied not on the content component, but rather on the user experience we enabled. The company would not have lasted 15 years if we had tried to do both, or relied solely on the media side. As it turns out, spending time at an old media stalwart can actually teach you a thing or two about running a technology company today.

Ultimately, the winners and losers of the new media landscape will be decided by technological prowess. Whether or not a company embraces that future, is up to them.

Read next: Windscribe is a VPN on steroids and it’s also an extra 15% off right now