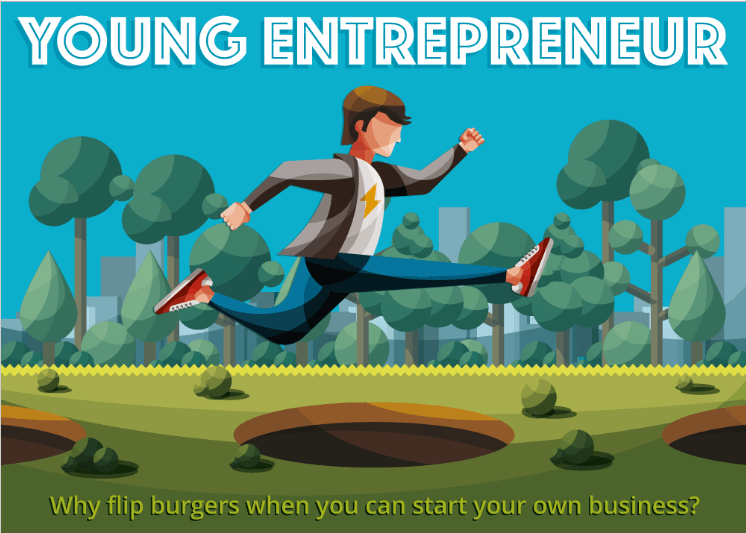 Being a young entrepreneur is probably a better idea than flipping burgers when it comes to your long term career. It can help you to learn valuable entrepreneurial skills that you can build on for years to come, putting you light years ahead of your peers when college graduation rolls around.

But there are some obstacles you will have to overcome in order to build your own business from a young age. Ultimately you will have to decide if you are up to the challenge of becoming a young entrepreneur.

Millennials as a generation basically skipped entrepreneurship in favor of working for the man. It’s no wonder – this was the first generation in history to experience an average of $26k in student loan debt en masse and not realize until graduation that they weren’t going to be able to afford to pay it back any time soon.

They also experienced the worst recession in American history, and as a result ended up making about $2k less a year than their counterparts did in 1980. Entrepreneurship dropped in the 20-34 year old age group from 34% in 1996 to 24% in 2016, and the number of adults under 30 who own stakes in private companies has dropped 40% since 2010.

Millennials are stuck in a hell of their own circumstances – they went to college and entered the workforce at the wrong time and now everyone is blaming them for circumstances they didn’t create.

If you saw your older siblings going through this, you would do everything to avoid that fate for yourself, right? Gen Zers know that this is not a sustainable lifestyle.

Millennials are having to put off owning homes for seven years longer than previous generations and they are also putting off milestones like getting married and having kids and moving out of their parents’ basements. Gen Z sees entrepreneurship as a better way to avoid this fate – 72% of high schoolers and 61% of college students say they would rather start a business after college than work for someone else.

Why wait until college graduation?

Typically the way you avoided student loan debt in the past was to work your way through college and pay as you go. College has gotten too expensive for that to work anymore – you just can’t pay tuition and living expenses if you are making anywhere near minimum wage.

Starting your own business can help you to not only make enough money to pay your own way through college, it can be a way to schedule your work around your classes, too. By the time you graduate you will have built up enough clientele to grow your business even further, or if you want to do something completely different you will already have the business know-how to do so.

There are lots of opportunities for younger people to leverage technology to build a career, from Fiverr to Etsy, but the opportunities certainly don’t stop there. The freelance economy is growing by leaps and bounds, and a lifestyle that was at one time exclusively associated with writers and photographers has opened up to include all different kinds of entrepreneurs.

Youth has its advantages in this scenario. You are less likely to heed the warnings of those who went before you about avoiding entrepreneurship or freelancing because the world is different and it’s time to try something new. You don’t yet have the responsibilities of student loan debts or mortgage payments bogging you down, so you are able to move more freely in your endeavours. And you are the ultimate digital native, able to leverage new game-changing technology

It’s not going to be easy, though

Gen Z has some serious challenges ahead when it comes to starting their own businesses. First, you can’t get loans and credit cards without a credit history, and you can get either if you are under the age of 18. There is a lot of ageism that is not legally mandated, too. The false notion that young people are lazy and entitled, which has been around since the beginning of young people, can lead to real world consequences from discrimination.

Even when it comes to something as basic as networking young people can face serious challenges. Many networking events are held at bars, where you have to be at least 21 years of age to enter. This prevents many young entrepreneurs from performing even the most basic functions of entrepreneurship.

Nothing worth doing is easy

Starting your own business at a young age is risky and you might even fail. But failure is how you learn, and the sooner you start the farther you will get ahead of your peers by the time college graduation rolls around. Learn more about the pitfalls of young entrepreneurs from this infographic. Are you ready to give entrepreneurship a go?

Read next: Believe it or not, regulations will make ICOs more awesome