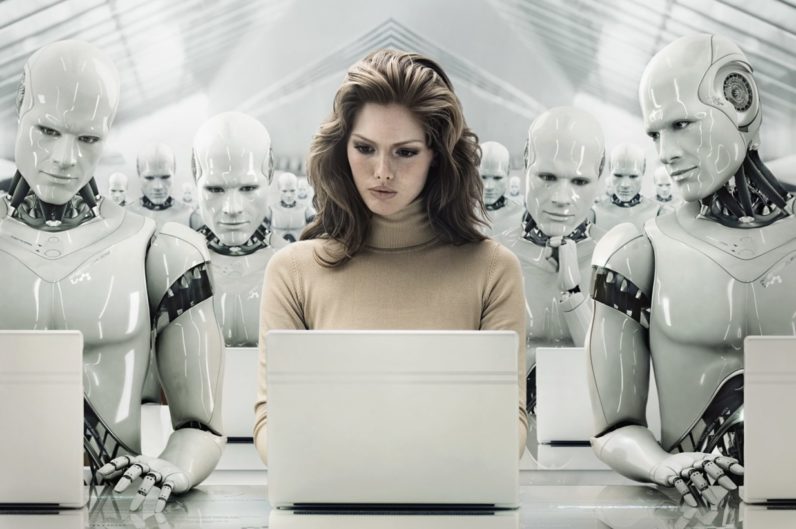 Experts offer differing views about where advances in artificial intelligence are leading us to in the long term. However they mostly agree that in the short term we have to get ready for an era where AI accounts for most routine jobs previously thought to be the exclusive domain of human intelligence.

This does not mean that humans will run out of jobs—yet. What it does mean, however, is that the dynamics governing the employment landscape are rapidly shifting. Humans will have to become smarter and much faster at obtaining knowledge and acquiring the skills required to perform tasks that have not fallen prey to automation.

Here are some of the trends that are helping us (humans) maintain our edge in a world that is fast being taken over by robots.

Augmented reality, the real-time overlaying of graphical elements on real world imagery, is still in its infancy. Yet much more than games and entertainment, AR is promising to be the computing platform of professional work.

Many industries are using AR to augment efficiency and productivity in of professional settings. By using AR glasses or headsets, engineers, healthcare workers, industry workers, and professionals in many other fields will be able to see real-time information and instructions about the task they’re performing while keeping their hands free to do the job.

For instance, as the following video shows, an AR glass boosts a technician’s speed by 34% when wiring a wind turbine’s control box because it replaces paper manuals with line-of-sight instructions.

AR assistance can help address the skills gap that many industries are currently suffering from by cutting the time and effort required to train the workforce for jobs with high skill requirements.

The practical uses of AR in workplaces has given rise to a new industry of AR applications and hardware, including the Enterprise Edition of the ill-fated Google Glass, which might become a favorite in manufacturing settings.

Ironically, one of the technologies that will help humans survive AI is AI itself. When viewed from a different perspective, AI can become a job enabler by breaking down the complexity of tasks as well as speeding up the learning process.

AI algorithms can collect and analyze information about learners’ interactions with a course in various ways, and help speed their way through the training by providing personalized content and guidance that addresses their specific pain points. Applying AI in education can be crucial as requirements for professional jobs change at a faster pace and workers need to be constantly learning new skills.

Elsewhere, the automation of complicated tasks by AI algorithms is enabling less-skilled or -experienced professionals to take on tasks that previously required years of education and work experience.

We’re seeing this in fields such as healthcare, where AI algorithms are helping clinicians and doctors be more productive at their jobs by providing them with knowledge and suggestions based on patterns obtained from the outcome of thousands and millions of previous diagnoses and treatment processes. Another field is cybersecurity, where AI algorithms are doing the bulk of the work in finding alerts and reducing false positives, while analysts decide which events need to be investigated.

Scientists and thought leaders agree that (for the time being) when humans and artificial intelligence work together, they can accomplish much more than any of them alone. Whether it will remain so in the future is to be seen.

Some believe that the only way we can survive the robot uprising is by becoming cyborgs, including Elon Musk, the CEO of Tesla motors, whose eccentric plans include colonizing Mars. Musk, who strongly favors the AI doomsday theory, suggests that to avoid being outsmarted by artificial intelligence, we must merge with machines.

Musk’s ventures include Neuralink, a company that plans to create devices that can be implanted in the human brain to improve memory or allow for more direct interfacing with computing devices. Among the things that such technology can accomplish is the direct uploading or downloading of thoughts and knowledge to and from the brain.

While Musk’s idea might sound outrageous, he’s not the only person who wants to enhance humans through technology. Others include Bryan Johnson, the Silicon Valley entrepreneur who personally spent $100 million to launch Kernel, a company that aims to build neural tools that will allow the brain to do things that were previously impossible.

The belief that science and technology can help humans evolve beyond their physical and mental limits has very strong advocates, including Zoltan Istvan, the founder of the Transhumanist Party, who ran for U.S. president in 2016 and will be running for governor of California in 2018. Istvan plans to conquer death through science and technology.

Whether robots will obey humans forever, fight and eradicate them or drive them into slavery remains to be seen. In the meantime we need to make the best of the technology that surrounds us.