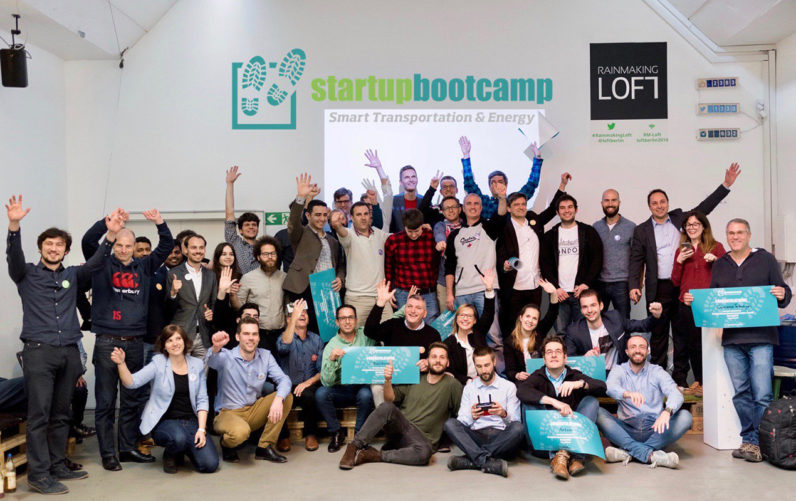 Around me are dozens of vintage cars in an old warehouse, tucked into a corner of Berlin’s north west. Those into cars are in heaven, dashing around the vast building, snapping photos of shiny vehicles as old as most attendees. I on the other hand head straight to the coffee and snacks.

It’s a fitting venue for Startupbootcamp’s 3rd demo day in Berlin, this time covering smart transportation and energy. Startupbootcamp runs over 20 programs around the world and is currently pushing into new territories outside of the EU and North America. This was my second demo day, and whilst production values were as high as ever, I wasn’t as impressed by the pitches and there was a disappointing amount of misogynistic comments from speakers and mentors. This was especially disappointing as one of the opening comments was that it was a shame that there was only one woman pitching. Some might draw connections between the two.

Here’s who pitched and what they’re creating.

AirTeam have years experience producing drone footage for ‘traditional’ drone targets such as real estate, and large scale industrial monitoring. However, the team felt like they needed an idea that they could productize more easily and pitched ‘AirTeam Roof Inspector’, drone software that will assess roofs for repairs and solar panels. In some way, the idea seemed less glamorous and interesting than their current portfolio, but speaking afterward they assured me that the two services will complement each other well.

Whilst elements of smart logistics have existed for a while in the form of smart pallets and shipping containers, smaller scale ‘smart containers’ for highly valuable items such as pharmaceuticals or medical products have not and Casesense hope to change this. Their website won’t tell you much right now, but I saw a preview of the product and its small, connected, traceable container that will help those in areas where packages are often lost, intercepted, or damaged. The team was one of many from Israel, which might explain their motivation.

It feels like there are now a ridiculous amount of applications and services that want to help you get from A to B in the best possible way. As most of these all use mapping data from the same half a dozen companies, anything new has to offer something compelling or different. Cellepathy’s point of difference is voice and personalization, instead of bombarding you with information that you don’t need to know, the app (or planned in-car integration) will learn from your typical journeys and only tell you when something is different.

Delphisonic is another company with a reasonable pre-existing customer base looking to expand into new territories (they are based in Turkey). The team is one of several creating real-time IoT telemetries for large scale industrial and transport systems such as factories and public transport networks. This helps companies predict when and where their systems will require maintenance, and thus save time and money. This is a busy space with a lot of large competitors, and it wasn’t entirely clear on what Delphisonic’s points of difference were.

Whilst it sometimes might not feel like it, package logistics has vastly changed over the past ten years, does anyone else remember the standard phrase “28 days for delivery”? Whilst we have the long distance networks well defined, the last few miles or kilometers are still ripe for streamlining. Gophr are trying to solve this problem by looking at the problem from a different perspective, matching jobs to courier capacity and availability instead of the typical other way around. Riders, dispatchers, and customers have access to an app interface that makes the booking and tracking jobs as simple as possible.

Mainstream commercial flying has undergone massive disruption over the past ten years, and Jet8 want to do the same for private hire of business jets. I doubt they will reduce the cost or exclusivity of hiring a private jet by much, but with most private jets in Europe flying for less than an hour a day, it’s an industry that could benefit from a shake up.

Make my Day is aimed mostly at car drivers, and as I alluded to earlier, I am not that target market, so I can’t speak too much about how useful I would find the service. With the app, you jump into your car and request how to get from A to B via a number of locations that you may need to visit, for example, “Take me to Joe’s Dinner via a bank and a card shop”.

Berlin has seen two services like Nok appear in the past months, and initially their ‘rent before you buy’ concept seems in direct competition to Amazon/Zalando, or a modernized version of old school high street rental chains. Lurking beneath the surface is actually a marketing business that can help brands understand what customers like and conduct market research on pre-release products. It’s a service that will appeal to those who like to keep up to date with the latest gadgets but don’t want to pay fully for each item.

ParkNav aims to make parking easier with crowd-sourced data and machine learning. I wasn’t clear on what the point of difference was, but I got the impression it was aimed more at car companies, city governments and partners rather than consumers directly.

The introduction to Supporton noted that they entered the competition late as the mentors felt that their idea wasn’t yet refined enough. Their pitch of an IoT maintenance platform and AR device for repairs was somewhat vague, with an industry thrown in (Electric Vehicle charging points) that felt token for entry into the program, as the presentation quickly moved on to other industries. This is a busy area and I didn’t see much to make Supporton stand out from the crowd.

Read next: How fintech companies are trying to make cryptocurrency investments safer