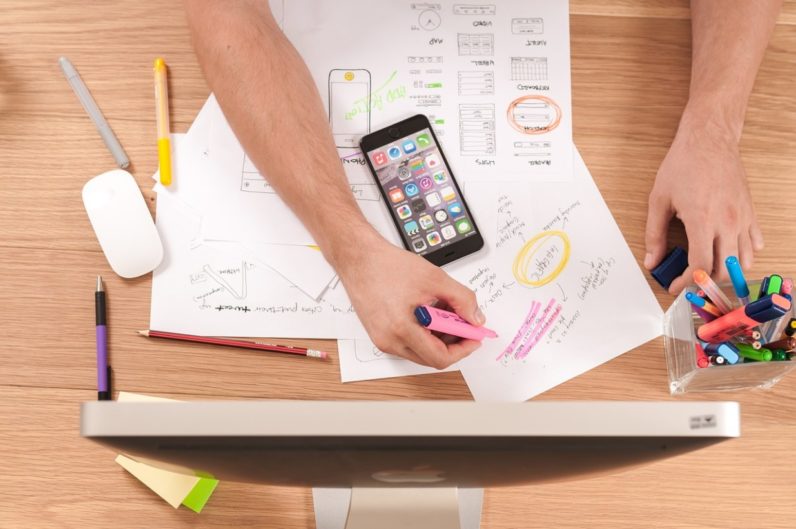 Every person privileged enough to make a living through their creativity understands a professional creative life depends upon reconciling two seemingly incompatible activities: making and selling.

Making — the soul-filling part of a creative practice — is best done without too much concern in the moment for how your ideas are going to be sold; good work usually only results when unencumbered by the soul-sucking hindrance of second guessing what other people are going to think of your ideas.

And the bolder an idea, the more unconventional, the harder selling becomes. As Jonathan Swift said, “He was a bold man that first ate an oyster.”

My mentor and former colleague Dale Herigstad (one of the designers of Minority Report’s famed concept UI) is fond of describing the invisible yet often impermeable barrier that prevents innovation as “the wall of the new.” As real as any physical wall, the wall of the new is an obstacle that anyone with a challenging, ambitious idea must negotiate. Even reasonable collaborators can erect this wall — in fact, more often than not, the wall of the new is a perfectly rational construct raised by well-meaning people.

There are two primary reasons why a reasonable person might resist a new and daring concept:

When encountering resistance to a bold creative idea, it’s important to identify the source of resistance, as different obstacles demand different approaches.

In the first case, when resistance is rooted in concerns of relevancy, convincing is a matter of making a rational argument: demonstrate understanding of the problem; show a gap in familiar solutions; demonstrate how your bold idea fills that gap; project the impact of your solution.

This approach is linear and narrative — and, as such, is usually facilitated by a slide deck. While slide decks can either be informative or miserable (see Edward R. Tuft’s  The Cognitive Style of PowerPoint) on their own merits, it’s clear that linear storytelling is apropos for rational arguments.

But, when it comes to the obstacle of elemental understanding of an idea, too often the tactics for making rational arguments are employed: “Sit down, let me walk you through a deck that shows my idea” is a fundamentally inadequate approach to demonstrate a complex, sophisticated, or unorthodox interactive experience.

Understanding interactivity without actually interacting is kind of like trying to guess at the color of objects by looking at a black-and-white photograph — the more familiar you are with the scene being depicted in the photo, the better your guesses will be; but if you’re unfamiliar with the scene, if it’s brand new to you, you’re going to fill in the blanks and make assumptions based on other experiences which may or may not be germane. Chances are, you’re going to get things wrong; your perception and understanding are going to be incomplete at best.

A far better approach is to say, “Here, why don’t you try this out.”

Liberating yourself from the safe confines of a polished deck, and handing your audience a prototype to try the idea out, achieves two results that help to overcome a lack of understanding:

Your audience looks at the proposed solution through the eyes of a user.

When people use a prototype, they are forced to become users themselves. By putting aside their role on the project (even just for a moment) and acting as a user, they are forced to try to understand the solution as a user would. If it works, it works; if it doesn’t, it doesn’t. But this evaluation is being made from a user’s POV, which is what really matters.

You give people a chance to have their questions answered immediately.

When presenting something in a linear fashion, as soon as somebody has a question that they don’t get an answer to right there and then, that question just sits there in their mind, festering — in fact, blocking out other points you might be making. If somebody has a question that can easily be answered (e.g., “what happens when I click on that button?” or “what happens if I ask the chat-bot this question…?”) in the prototype itself, the questions you get will be much more productive and focused. The dialogue shifts from “how does this thing work?” to “is this the right solution?” and “how might we make this a reality?” which are much more valuable conversations to have.

This approach isn’t new or revolutionary whatsoever. Architects show physical models, which allow people to look at ideas from different vantage points of their choosing. Filmmakers show storyboards and animatics, which allow the audience to feel what it’s like to watch the movie before it’s made. Industrial designers show models and mock-ups, which allow you to hold a product in your hand before the assembly line is tooled. In these fields, no bold idea would ever be attempted to be sold without this sort of experiential communication. And no real-life user evaluates the success of an experience solely by looking, but not touching.

For prototyping to be of use in overcoming the wall of the new, the making of prototypes must be a central part of the conception and design of those ideas — a prototype won’t work as an afterthought.

In interaction design, most every interaction designer knows this in principle. But the reality of day-to-day work — especially in larger teams and on larger projects — is that there are always the excuses of deadlines and design revisions to push off or limit prototyping. Despite a host of tools from which to choose, all of which make prototyping quick and easy — InVision, Adobe XD, Facebook’s Origami Studio, Google’s Stage (still forthcoming, as of this writing) each suited to different levels of fidelity and workflows — investment in continuous, integrated prototyping can, itself, meet resistance.

If you find prototyping difficult to integrate into your process, or convincing your team that it’s valuable, remember that prototyping isn’t just a useful tool to help with creative problem solving; it also is an invaluable tool for the part of the process that creative practitioners would often prefer to ignore: selling.

Read next: How AR and computer vision will impact our lives for the better