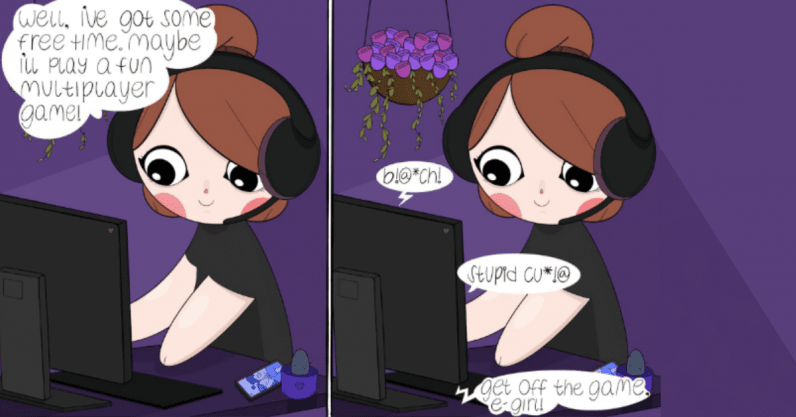 Although societal stereotypes have you believing the gaming industry is an arena of masculinity for men-only, women actually make up almost half of video game players. But despite their numbers, women are not treated equally and are often subject to online abuse and sexual harassment from male gamers.

The subreddit /r/GirlGamers, which currently boasts over 80,000 members, however, aims to rectify this. It does so by providing an online community space for people of all genders and identities in the gaming industry to connect, game together, discuss the realities of being a woman or non-binary in the industry, and share the occasional meme that I’m sure every non-binary and woman gamer can relate to.

For example, the comic illustration of a woman using voice chat online and immediately hearing something along the lines of: “Hey, eGirl! I wanna eat you out and suck on your toes.”

Or the classic reaction of a man realizing he just might be playing a video game with a… girl. As he squints into the depths of confusion and despair, he questions: “Wait a sec, you’re a girl?” Followed by the inevitable: “You must be some fat ugly whore, are you Pmsing?”

These memes, also known as actual real experiences women face online, harmlessly inject fun into the harassment women in gaming face on a daily basis. But they also raise awareness of the realities of abuse while unifying a community of women who may be contemplating leaving the industry once and for all.

The members of GirlGamers use the space to question how others cope with the constant barrage of sexual harassment. One gamer asked under the “Venting” category: “Why can’t I just leave my mic on and play a game?!” after receiving creepy comments from men or not been taken seriously by other gamers.

Others in the group related to this issue with some comparing the default response of “just turn your mic off” as the equivalent of “just wear more conservative clothing” to not attract harassment.

Having a mic switched on during gaming doesn’t just improve the game experience, it’s also an opportunity for gamers to connect with one another. With so many women opting to mute their voice, this further perpetuates the stereotype that gaming is just for men.

Other queries include questions from women that would’ve most likely been downvoted on any other male-dominated forum. For example, one member asked about the best gaming headphones to use with her newly healing earlobe double piercings.

Jamie Klouse, who helped to create the forum, told The Outline: “Had that been posted on /r/gaming or another large male-dominated community, it would have been downvoted to oblivion for being irrelevant to their interests, and because of the relatively low percentage of women in the community compared to men, the thread likely would have never been seen by any other women who might find it to be an interesting topic.”

But just how bad is sexual harassment in the gaming industry?

Many women gamers avoid online gaming altogether whilst others opt to remain anonymous to avoid inevitable harassment. A study published by Bryter last year found that one-third of women who play video games regularly experience abuse or discrimination from other male gamers online. Of those, over half experienced verbal abuse and 10 percent have even been threatened with rape.

But women are pushing back. Earlier this month, KaceyTron, a longtime gaming streamer with almost half a million followers on Twitch, raised awareness about online sexual harassment by organizing a “SlutStream” where women gamers reunited to reclaim the meaning of “slut” — an insult often carelessly hurled at female gamers.

However, the problem isn’t just between gamers. Just last month, the gaming hardware brand Razer announced it wouldn’t renew Gabriela Cattuzzo’s contract, a popular Brazilian video game streamer with almost 90k followers on Twitch. The decision came after Cattuzzo posted a series of now-deleted tweets stating that “men are trash” in response to the online sexual harassment she faced on the regular — which Razer Brazil considers to be “extremism.”

Although campaigns like KaceyTron’s and subreddits like GirlGamers provide a safe space for women and non-binary gamers to unite, it’s ultimately down to larger platforms including Razer to take harder action against those who use the platform to sexual harass and belittle women.

Read next: UK dark web dealers get more than 20 years for selling cocaine for Bitcoin