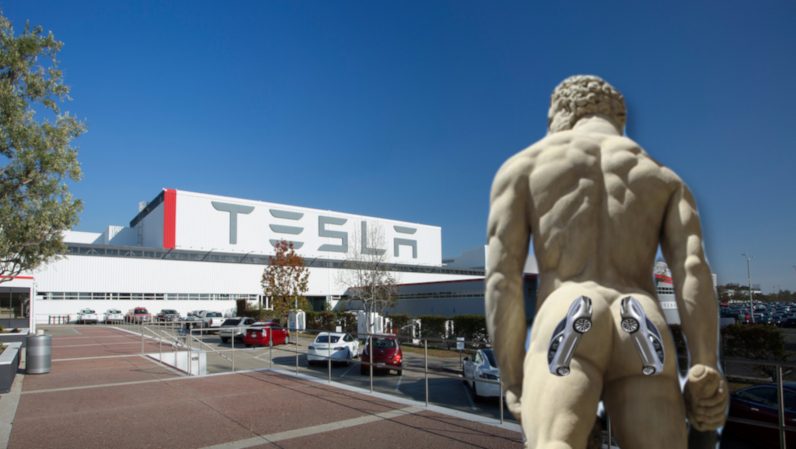 Upgrading an internal combustion engine vehicle typically requires the help of a mechanic or a visit to the car’s dealership. But with Tesla‘s over-the-air software updates the future of vehicle modifications looks very different.

Earlier this week, author, scholar, statistician, and self-professed flâneur, Nassim Nicolas Taleb, tweeted about his interactions with Tesla after he accidentally upgraded his EV with his posterior.

According to Taleb, he “butt dialed” the Tesla app and bought the $4,333 Full Self Driving upgrade accidentally. He subsequently shared his correspondence with Tesla‘s customer support, and it’s, erm, concerning.

Elon @elonmusk, your Customer Support at Tesla is even worse than I claimed last time.
It is an insult to your customers. pic.twitter.com/3HZ2YSjigS

But what actually happened?

Taleb, a Tesla owner, says that he left his car’s accompanying app open on the menu where updates and add-ons can be purchased.

The app was open on that menu.

When putting the phone in his pocket, he accidentally hit the buy button. Taleb says there was no confirmation process or password request to verify the purchase, pretty crazy for something that costs over $4,000.

Though he wasn’t aware this had happened until he got into his car later on, which is where things went further south. Read the below image for Taleb’s communication with Tesla.

Given Tesla‘s predominantly digital sales presence, there was no way for Taleb to speak to someone at the company about the erroneous purchase. It took 9 days for him to finally get a response from Tesla. An email conversation ensued, which paints a stark future of car maintenance.

Tesla‘s response to Taleb was confusing to say the least.

Apparently, upgrading the software on your Tesla is the same as building an extension on your house; very difficult, nigh-on impossible, and pointless to reverse.

Tesla denied Taleb a straight refund saying: “This would be similar to the situation of paying for an addition to a house, deciding you don’t like it, and then requesting a refund from the contractor.”

It’s kind of like offhandedly mentioning to a mechanic that you like the new wheels Tesla is offering, and them then sneaking to your house and fitting the parts to your car while you slept and charging you for it.

I shouldn’t have to point out how silly this is, but I shall.

Software is not permanent like bricks and mortar. It’s also impossible to accidentally build and buy a house extension. And not liking something is very different to never wanting something in the first place.

Tesla‘s customer service went on to try to upsell the features, saying that they may be of “significant use to yourself [Taleb].”

But don’t worry, Elon Musk chimed in and is aware of the situation. He says it will be addressed.

Just saw this today. Tesla refunds in general should be easy to get electronically & certainly through customer service. Will he addressed.

But that’s sort of besides the point. As Taleb himself points out, he has more than 400,000 Twitter followers. Will a fair response be given to all Tesla owners should this happen again?

This whole debacle highlights a bigger issue in the future of cars. How will they be serviced? And how bound will owners be to their vehicle‘s software’s terms of service?

At the very least, if $4,000 upgrades are going to be sold in an app, add some kind of verification process, please Tesla.

Read next: Smash Bros Ultimate to get 6 more fighters. Who the heck could they be?