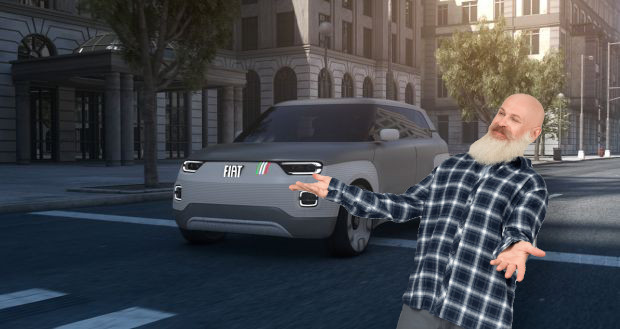 In an unexpected and shock reveal, Japanese electronics manufacturer Sony released its Vision-S concept car to world at CES this week. Sony? Making a car? WHAT!?!

But there are more realistic — and more important — concepts on display at CES, like Fiat’s Centoventi electric concept car.

Italian automaker Fiat first announced the Centoventi last year as part of its 120th Anniversary celebrations, which should come as no surprise if you speak Italian.

Fiat says it wants the Centoventi to democratize mobility. In other words, it wants to make an “affordable but cool” car. That’s certainly been true in the past. Take the original 500. It was cute, fun, cheap, and so basic parts were easy to come by.

It’s easy to make highly technical cars, packed with features, cool. But making them affordable? That’s a little more difficult. Fiat thinks it can do it with its electric, modular Centoventi, though. And for one, I hope it does.

Electric cars are expensive, and the batteries are largely to blame. Ever wondered why Tesla’s have great range, but are also very pricey? There’s your answer.

With growing emissions regulations around the globe, it looks like the future of motoring is electric. But unless prices come down and affordability goes up, many will have to take a long hard look at how they get around. But hopefully, if more cars like the Centoventi get dreamed up, that won’t have to happen.

Pick your parts, including the battery

The Centoventi is an entirely modular vehicle. It comes in one color and one base specification. It’s then down to the owner to customize it to their liking. The bumpers, roof, wheels, and internal fittings can all be changed to suit the owner’s desires. The best bit though, the battery is modular too.

Fiat’s dream sees the Centoventi hold a modular battery pack which has a starting range of about 100 km (ca. 62 miles) with the potential to expand it up to 500 km (ca. 310 miles).

It says additional batteries could be bought when a driver’s needs change. The energy packs could even be rented if a driver needed a little extra range just for a weekend road trip.

When the concept was first announced last year, Fiat said the car would in theory come with one factory fitted battery, but could fit an additional three. Each battery would increase the vehicle’s range by 100 km (ca. 62 miles).

Changing batteries would be as simple as swinging by your local Fiat dealer or service station and having them fit the new power banks. The batteries would mount into the floor pan of the car on sliding rails, to make fitting them relatively easy. In principle, it would only take a few minutes.

By making batteries modular, you can make an affordable, low range, entry model that would suit most electric driving needs. But at the same time, you can address a driver’s range anxiety by selling them more batteries when and if they need them.

It’s a concept most people would be familiar with if you’ve ever used a remote control, clock, watch, radio… It all sounds wonderfully simple.

There have been attempts in the past to develop interchangeable car battery platforms, but so far, none have materialized.

One company that was leading the charge for replaceable car batteries, Better Place, trialed its vehicle tech in Tel Aviv, Israel, and sold around 500 cars.

Like the Fiat Centoventi, Better Place’s proposition was as simple as filling your car up with gasoline. You’d drive your car to a battery-switching station, machines would take out the old depleted battery and put in a fully charged new one. The process was said to take about 5 minutes.

Besides mitigating range anxiety, as battery technology moves on, older electric cars could also have newer packs fitted to improve their range. It also makes the EV itself a bit cheaper, as the battery is leased on a separate plan.

It’s a great idea; in theory

Sadly, Better Place fell flat with automakers. Only French manufacturer Renault made a vehicle compatible with Better Place’s battery swapping tech, and at that, it made just one model.

In hindsight, it isn’t all that surprising, though.

To EV makers, battery technology is vital intellectual property. And it’s the main component of an electric vehicle that affects its range. For Better Place’s idea to take off, all electric car manufacturers would need to commit to a standardized battery.

However, this would prevent EV manufacturers from differentiating themselves on their battery tech. Imagine if there was one type of laptop battery, it would dramatically affect the size, shape, weight, and importantly, performance, of said device.

It turned out this was too big an ask for EV manufacturers. Better Place shutdown after losing $812 million; it filed for bankruptcy in 2013.

But perhaps the real problem was that Better Place wanted to run before it could walk. It wanted to change an entire industry, before proving the concept in the early days of modern EVs.

Fiat’s concept doesn’t rely entirely on replaceable batteries. They’re an added option, for when you need them. It provides a safety net for drivers.

Fiat’s idea focuses on just one vehicle. It doesn’t require dramatic changes in infrastructure, and the battery replacement process sounds simple enough that anyone could do it.

Importantly though, all this could stand to make the Centoventi an affordable and highly usable electric vehicle.

Unlike Musk‘s dystopia where we need bulletproof vehicles, Fiat’s vision is a future I’d like to live in.

Read next: This QuickBooks training will shore up your business accounting for under $30