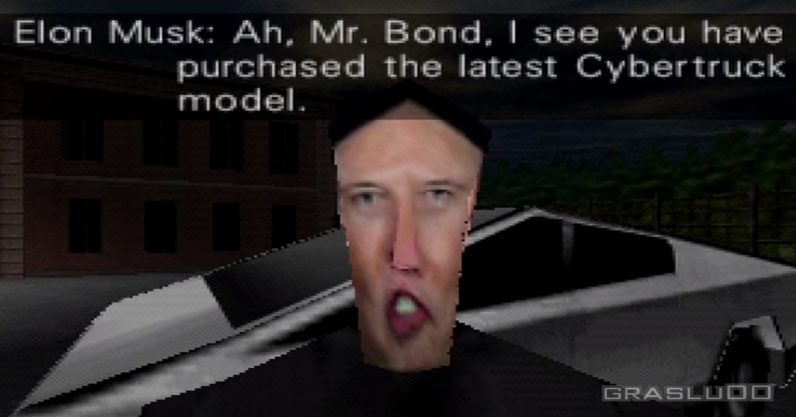 A clever modder has put the Cybertruck in an environment where its striking appearance fits in — namely, a Nintendo 64 game. The Nintendo 64 game: Goldeneye 007. And damned if it doesn’t suit it perfectly.

One of the most common jokes at the expense of the Cybertruck was that it looked like a polygonal model from a 64-bit console of choice. It was compared to everything from Pokémon to Lara Croft’s bust line — but my favorites were probably the Photoshop jobs that put the car into old-school racing games like Cruisin’ World. Twitter is a riot when it’s got something this cool to make fun of.

It was only a matter of time before someone took it one step further, and here’s that step:

The truck is a tiny bit more pixelated than the real vehicle, but honestly not by much. You can still read its distinctive silhouette pretty plainly.

The modder, who goes by the handle “Graslu00,” not only added the Cybertruck to the game, they also somehow managed to mod Elon Musk into the game, putting his face on an NPC body. No offense intended to Musk, but I can’t help but think his face fits this game just as well as the Cybertruck does. It’s only slightly nightmarish. There’s even a bit of dialogue where Bond question why Musk is giving him a Cybertruck, and Musk responds that he wants to see fossil fueled cars and those who drive them — the villainous General Ourumov included — put out of commission.

I had no idea Elon was so cutthroat, but somehow I’m not surprised either. Given that the model for the Cybertruck replaces the tank, this truck is also packing some heavy ordinance, which I would also not be entirely surprised to find secretly hidden somewhere in the real deal.

You can download the mod for an N64 ROM here.

Read next: Why China's 'military AI budget' is irrelevant (spoiler: all AI is military AI)