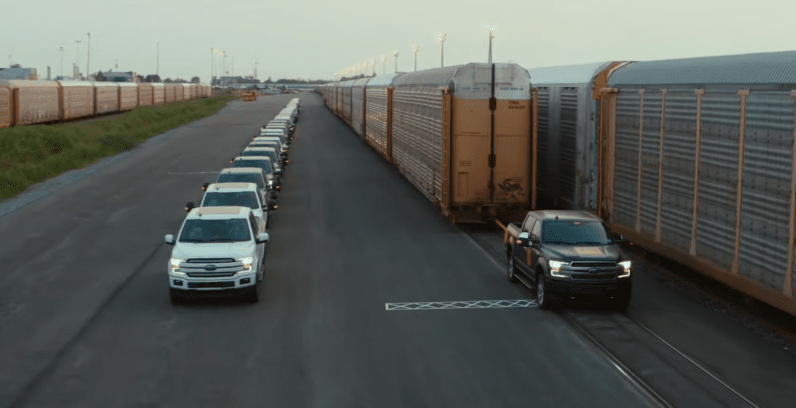 Ford promised us an electric version of its F-150 truck was on the way back in 2017, but it’s been mostly silent on the matter since. Though the vehicles is still years from launch, today the company came out in a big way, showing a prototype electric F-150 towing a train weighing over a million pounds.

In the video, Ford invites some current F-150 owning-men to a train yard. They are apparently unaware of the company’s plans until the electric F-150’s chief engineer, Linda Zhang, reveals the new model and its burden of the day. It’s an ad, so of course the F-150 owners were impressed when the electric vehicle managed to tow the million-pound freight train across 1,000 feet, seemingly without breaking a sweat.

After that, Ford went a step further, loading the train with 42 gas F-150s, bringing the total weight to over 1.25 million pounds. Watch for yourself below:

Of course, it’s not as if Ford would show the truck failing at the task. Physics tells us that overcoming the initial static friction is the tricky part, but it’s certainly an impressive-looking demo. For reference, the current gas F-150 maxes out at a rated towing capacity of 13,200 lb, though to be fair, Ford does caution in its video that this is a “one-time short event demonstration.” A more revealing demo would’ve been to see how the classic F-150 compares.

So yes, this is Ford flexing its marketing department, but it’s the kind of marketing that’s actually directly relevant. There is many a truck owner who distrusts electric vehicles, seeing them as a hippie novelty; this ad is meant to dispell any notion that an electric F-150 would be underpowered. Until I see a gas F-150 pull a similar feat, I’m going to assume the electric model has got a fair bit more torque to it.

With electric trucks from Ford, Tesla, and newcomer Rivian on the way, maybe America’s gas holdouts will finally see that electric is the future.

Read next: A new controller aims to fix the Nintendo Switch's lack of voice chat