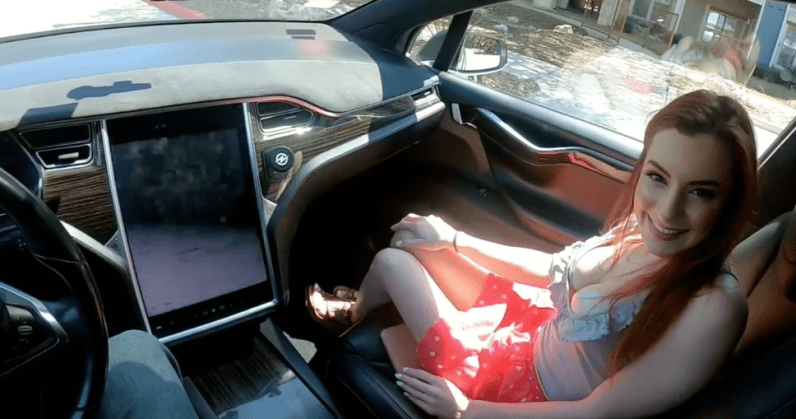 Taylor Jackson is a pioneer, of sorts. The adult actress, to our knowledge, is the first to shoot a pornographic scene in a moving vehicle without a human driver. And much like other pioneers her actions will inspire some while leading others to reenact an event that could, quite possibly, end in death.

Jackson recently shot a pornographic scene where she and a man in the driver’s seat engaged in various sex acts while riding in a Tesla, on Autopilot.

As dumb as it was, Jackson isn’t the problem; Elon Musk is.

Look, we knew that people would fuck in self-driving cars. This is something we all saw coming (I haven’t decided if I intended on that being a pun or not yet) — including a group of researchers who published a report on the topic late last year.

Reporting you to Elon for not having two hands on the wheel with autopilot enabled. #phworthy

And while we certainly look forward to boning in a car on the way to the company Christmas party, the truth of the matter is that autonomous technology isn’t anywhere near safe enough yet to allow for this kind of distraction.

Tesla CEO Elon Musk isn’t helping anyone to understand that. Naming the AI ‘Autopilot,’ for one, was an irresponsible choice, as Musk himself would tell you — and has, repeatedly — Tesla’s aren’t meant to be driven without input from a human driver.

Autopilot is meant to be an assistive measure, not the primary means of piloting a vehicle. Tesla reminds anyone curious about its Autopilot technology of exactly this on its website:

Autopilot is intended for use with a fully attentive driver, who has their hands on the wheel and is prepared to take over at any time. While Autopilot is designed to become more capable over time, in its current form, it is not a self-driving system.

Using similar technology, a self-driving Uber killed a pedestrian late last year. Its driver was reportedly watching Hulu. Few would argue that watching The Handmaid’s Tale is safe while driving, but I think we’d all agree that its safer than a quickie at highway speeds. It’s not apples-to-apples, as the companies use different AIs to pilot these semi-autonomous vehicles. What matters is that none of the current vehicles on the road are safe enough to drive without human intervention.

Musk, though, continues to fuel this erroneous belief that they are. Not through words, but action.

In a 2019 60 minutes segment, Musk conducts an interview while behind the wheel of a Model 3. Journalist Leslie Stahl, at one point, remarks that the vehicle is operating itself without intervention from Musk.

This was an opportunity for Musk to explain Autopilot as a system that assists the driver, but instead he talked about how cool it was that the Model 3 could switch lanes on its own. He had a chance to educate, and instead used it as a means to advertise, as our own Tristan Greene pointed out. (This would have been a good time to talk about the Model 3’s classification as a Level 2 automated system, out of five, and how it needed frequent human intervention to be considered safe).

While Tesla Autopilot accidents are rare — rarer than those caused by human drivers, in fact — it’s irresponsible to assure the public in such a way that they place undue confidence in systems that are still, essentially, part of a grand beta testing experiment.

This is normally the point where a Tesla PR would reach out to remind me that there are visual and audible reminders for drivers to take control of the vehicle before accidents. To which I’d remind them that one of these incidents, a 2016 crash in Florida that killed a man, the audible cues, according to Tesla, gave the man six-seconds to react to the collision — take this with a grain of salt, as it comes from Tesla itself, which certainly has a motive to direct blame at the driver of the vehicle.

As for Jackson, the performer involved in the Autopilot sex act, are we to assume that she could dismount her sex partner and return to her seat within that time? Is it possible? Maybe. But that’s not the only dangerous part of the encounter. Tesla’s Autopilot system can be disengaged when a human applies force to the steering wheel — a distinct possibility when banging in the driver’s seat.

It’s unlikely Tesla would condone this type of behavior, but it’s worth noting.

If that’s the case, maybe Musk’s 60 minutes interview, and Jackson’s romp on the freeway, appear to have come a bit early (Okay, that one is definitely a pun.)

Tesla has yet to respond to our request for comment.

Read next: SaaS startups are changing the founder/investor dynamic