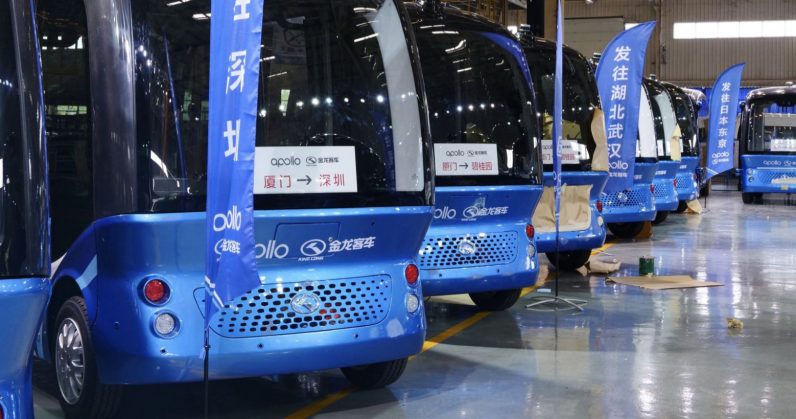 While the likes of Tesla, Uber, and Waymo grab most of the headlines in Western media when it comes to autonomous vehicle tech, Baidu is worth tracking too. The Chinese tech giant just saw its 100th self-driving bus roll off the production line this week, and it’s set to roll them out in China and Japan soon.

The 14-seater Apolong mini-bus features Level 4 autonomy, which means it can operate without a human driver behind the wheel in specific conditions and within geo-fenced areas.

They’ll soon begin plying in cities in China including several Chinese cities including the capital of Beijing, Shenzhen, Xiongan, Pingtan, and Wuhan.

In addition, the company announced that it’s partnering with investment firm SoftBank’s autonomous vehicle arm SB Drive to bring the buses to Tokyo and other cities in Japan in early 2019.

The buses will feature Apollo 3.0, the latest version of Baidu’s open autonomous driving platform that was debuted last year. The update adds support for valet parking, and will likely find use among the 116 partners that have signed up to use Apollo, which include Jaguar Land Rover, Hyundai, Honda, and Ford.

It’ll be interesting to see if the move can help Baidu gain an edge over autonomous vehicle companies in the US. Thanks to a range of test methods, Waymo has covered more than five million miles on real roads with its self-driving minivans, and is believed to be ahead of its rivals in developing this technology.

Read next: Volvo's car-on-demand service is launching in 2019