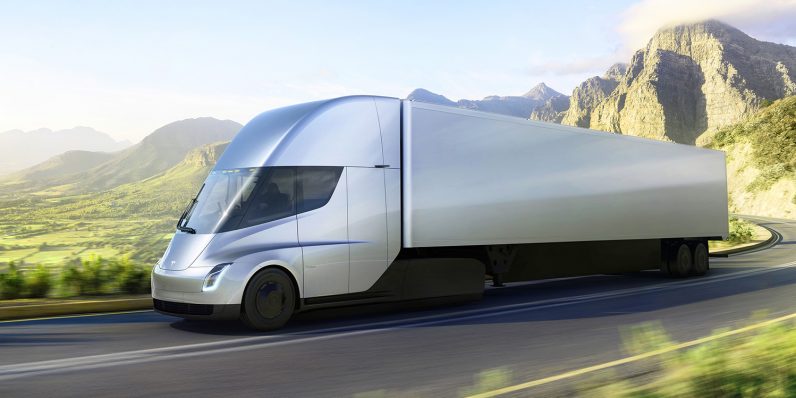 At an event in Los Angeles today, Tesla unveiled its new Semi electric truck, which is capable of traveling 800 kilometers (500 miles) on a single charge with a loaded trailer.

Powered by four independent Model 3 motors, the vehicle can go from 0-60 mph in just five seconds; it’ll take 20 seconds while paired with an 80,000 pound load. The idea with the Semi is to create a shipping solution that’s not only more environmentally friendly than a diesel truck, but also more economical to own and operate.

The interior features a central cockpit for greater visibility and two large displays for navigation and other controls on either side of the cabin. The shatter-proof windshield uses Tesla Armor Glass that the company says is far more durable than standard glass; that’s a big deal because a cracked windshield takes time to replace, and it’s illegal to drive with a damaged one in the US, which means downtime and money down the drain for trucking companies.

In addition, the Semi beams data to a mobile app that presents vital information about the vehicle, along with remote diagnostics, preventative maintenance, and fleet management information.

With the Semi, the big draw for logistics companies will likely be the lower cost of ownership. Tesla says that a diesel truck is 20 percent more expensive to run per mile, and that running an Autopilot-powered convoy of Semis is even more economical than transporting cargo by rail, while also being 10 times safer than having the vehicles manned by human drivers.

It’ll be interesting to see if that’s enough to convince shipping companies to make the switch to Tesla’s electric offering. The Semi will begin production in 2019, and you can reserve them now by wiring across $5,000 apiece.