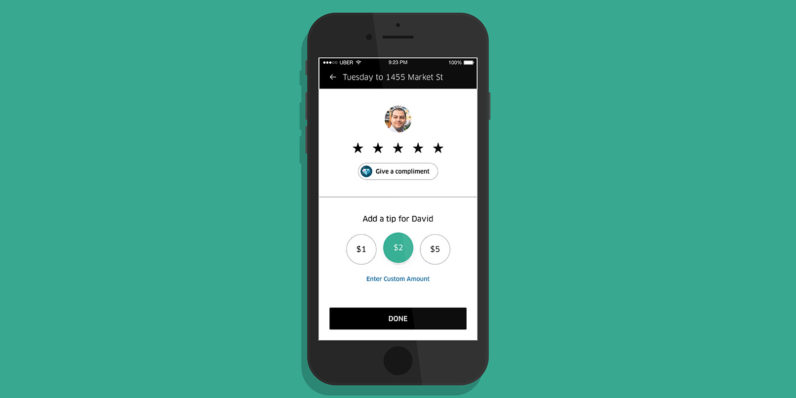 Uber has finally caught up to its rivals in the ridesharing business with the launch of its latest feature – the ability for riders to pay drivers a tip through the app.

Currently being tested in Seattle, Minneapolis, and Houston (with plans to expand across the US and eventually other countries), it’s simple enough to use – after your trip ends, you can choose a preset amount when rating your ride, or enter a custom amount; there’s a 30-day window within which you’ll able to tip your driver. It certainly sounds like the feature will be a boon to drivers on the platform hoping to earn more per ride. But how many of us will use it?

Tipping on-demand cabs certainly isn’t new – Lyft has allowed and encouraged the habit among its users for roughly five years in the US. But Uber’s service is available worldwide and as such, people in different parts of the world will likely not react the same way to prompts for tips as they would in its home market.

For some riders, part of the draw towards on-demand cabs is convenience – and that means leaving your cash at home. So, if you aren’t carrying change, would you still care to tip a driver for a regular ride that’s simply about getting from Point A to Point B?

It sure seems to have worked for Lyft – the company noted earlier this week that its drivers have earned $250 million in tips since the feature became available on the platform. And now, it’ll prompt riders to give larger tips than the usual when they take longer rides.

That approach may not work well in other countries, for a variety of reasons. Tipping culture isn’t as prevalent across the globe as it is in the US; in Japan and South Korea, it’s not common to leave a gratuity, and in Australia, Belgium, and India, service fees are usually included with your bill.

It’s also worth noting that in some markets, like India, Uber incentivizes drivers by paying them a daily bonus if they meet earnings targets. If that’s widely known, riders may not feel the need to tip drivers most of the time.

I’ve rarely encountered exemplary service with Uber in India and while traveling across Europe over the past couple of years, so I haven’t particularly felt the need for an in-app tipping feature. But at the same time, it is nice to know that I don’t have to carry cash in the event that I’d like to thank a driver for a great ride.

If Uber enabled tipping in your country, would you use the feature? And how much would you pay? Let us know in the comments.

Read next: Is an uneasy peace at hand in the ongoing ad blocker battle?