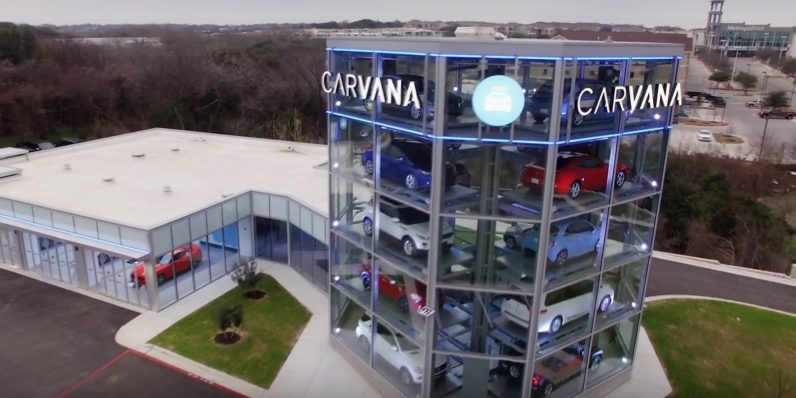 Living in Austin just got weirder.

A Central Texas dealership just built a coin-operated vending machine full of cars. The glass building housing the “vending machine” is five stories tall and stores up to 20 cars. It’s the brainchild of Carvana, an online-based used car company from Phoenix.

“Coin-operated,” in this case, doesn’t refer to actually currency. You buy your car online via Carvana’s site and associates give you a large coin when you pick it up. If Carvana’s own advertising footage is to be believed, you insert the coin into a slot somewhere outside the glass tower.

After you insert the coin, the mechanical part of the vending machine goes to work as you watch on a monitor. Robots find your vehicle inside the tower, lift it from its platform, and lower it onto another. They then move the car to a nearby bay where you can pick it up. You have seven days to put your new car through its paces, or return it for a full refund.

There’s no word on whether or not this is actually faster than having a human drive your car to you from a nearby lot. It’s certainly more interesting, though.

If you don’t live in the Austin area, but want to experience this for yourself, don’t worry. Carvana even supplies up to $200 to mitigate airfare — and includes “white glove transportation” from the Austin airport.

This is part of Carvana’s campaign to make the car-buying process as fast and digital as possible. You can already complete the buying and trade-in process online. It also offers the option to drop off your trade-in vehicles at the vending machines.

Carvana has already built two other “car vending machines,” the first in Nashville in 2015, and the second in Houston in December. It’s also launched a free car delivery service in Austin – that’s free delivery of cars, not delivery of free cars.

You can find out more about the process on their website.

Read next: Millions of apps could soon be purged from Google Play Store