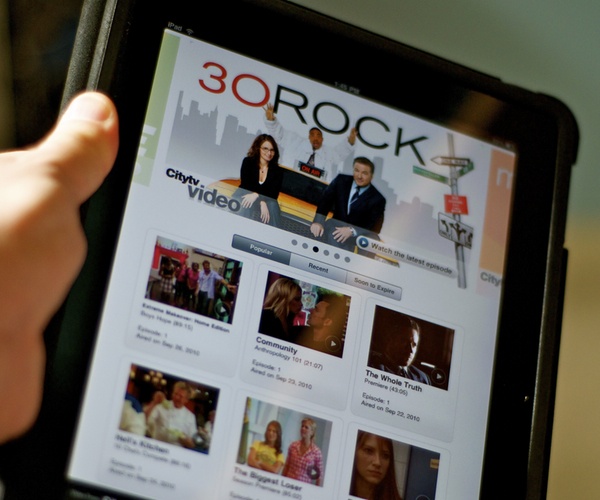 Putting a stake in the ground for all Canadian broadcasters, Rogers Media and CityTV have released a new iPad video app that will allow Canadians to watch and catch up with their favourite shows from CityTV. From the Rogers press release:

“How Canadians interact with traditional television is evolving. They want to watch their favourite shows when and where they want to on their preferred device – whether it’s a television, smartphone or a tablet,” says Claude Galipeau, SVP & GM, Digital Media, Rogers Media Inc. You can download the free app from the App Store now and start enjoying the shows now. CityTV has put a lot of good content up for the first launch. Shows like 30 Rock, Fringe, How I Met Your Mother, Modern Family, Parenthood, and Cougar Town are all ready and waiting for you. As for news, right now the selection is limited to Toronto’s Breakfast Television, but I suspect that more cities will be added soon enough.

I gave the app a quick try and thought the streaming quality was very good and after a short commercial (30 seconds), Fringe started right up. Will I come back to this app for more shows? I think so, there is a nice selection of things to watch that I’m at least moderately interested in.

There are bigger things at play here, however, than just a wee little iPad app. When Netflix launched in Canada, the video offerings, especially as far as TV goes, was less than great. The main reason cited by all parties was the cost of licensing the shows from the major Canadian networks (CTV and Global being the biggest). What isn’t often mentioned is the fact that all the broadcasters, which the exception of the CBC, are all owned by companies that also own cable companies and/or Internet services (Shaw is buying Global, Bell owns CTV, and Rogers owns CityTV). What I expect is that with CityTV launching their app for the iPad, CTV and Global will quickly follow suit. Want to catch up on your favourite shows? No problem, just download the appropriate broadcaster’s app. Honestly, while I’m not a huge fan of how media are being consolidated in Canada, I think if all the broadcasters offer their apps for free (ad supported is fine, that’s what TV is anyway) and let me watch shows when I want to, I’m all for it.

So hats off to CityTV on the launch of their iPad app. It might be a first for Canadian broadcasters, but I hope it isn’t the last.

Read next: Life before the computer, do you remember?