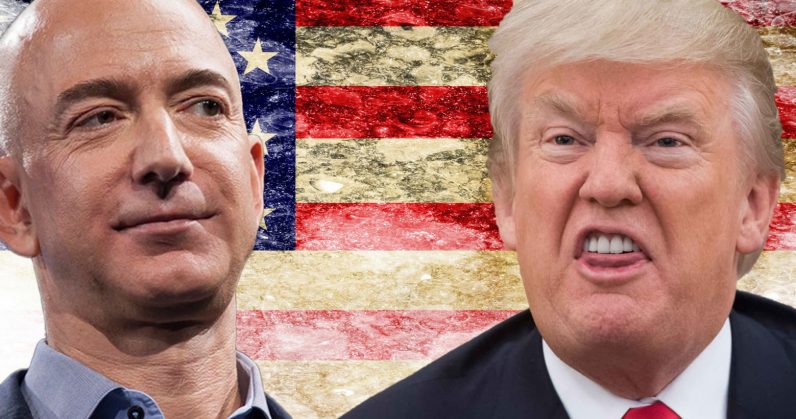 The writing is on the wall; winter is coming for the world’s largest tech companies. But if you thought Facebook would be first on the chopping block, you’re mistaken.

According to a report by Axios today, Trump is out for blood, and that blood, reportedly, belongs to Jeff Bezos and Amazon. This won’t surprise anyone that followed the 2016 campaign trail. Trump continually squawked about both Amazon, and Bezos’ tax treatment — later including The Washington Post (which Bezos owns) for good measure — stating the company would “have such problems” if he were elected president, in a February 2016 speech.

The report suggests Trump is serious about challenging Amazon’s tax treatment in the coming years, citing concerns for mom-and-pop retailers — a concern we shared last July when looking at what the future holds for the ecommerce juggernaut.

According to a source familiar with the matter, in a comment to Axios: “[The President has] wondered aloud if there may be a way to go after Amazon with antitrust or competition law.”

Trump’s targeting of Amazon, though, could open doors to criticism on both sides of the aisle, particularly those who would interpret the move as a vindictive one due to unfavorable coverage in The Washington Post.

Trump himself often refers to the publication as “Amazon Washington Post” or “Fake News Washington Post” so it’s not a stretch to assume that targeting the person with a shared interest in both Amazon and WaPo could be a move to further his own agenda.

In decades past, it was Wall Street that called the shots. And while that’s still true today, it’s the likes of Apple, Google, Amazon, and Facebook that are quickly staking claims to their share of influence over Washington. Left unchecked, you’re allowing the largest and most influential companies to essentially self-regulate, a move that hasn’t panned out well for companies like Facebook to date.

But Facebook, for all its recent troubles — including calls to testify before Congress — doesn’t seem to move the needle for Trump. Per Axios, Trump isn’t interested in how Facebook handles user data, and it’s his belief that the Russia narrative and the widespread propaganda that accompanies it on the social network is but a hoax.

The facts, per usual, would seem at odds with this assertion.

Perhaps, though, Amazon’s most immediate threat isn’t regulation, but the fear of it. Share prices were down more than seven precent following the report.