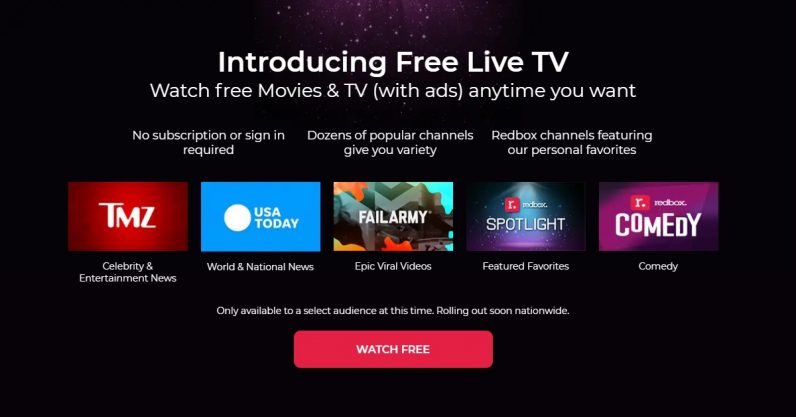 With so many players in the streaming space, it can be easy to overlook some of the smaller players that might offer a better experience for a cheaper price. So with that in mind, Redbox is now offering a free, ad-supported streaming option on its site and app. There’s not much to it yet, but if you just want a free way to watch some Family Feud and Unsolved Mysteries, it’s a thing that exists.

The service, Redbox Free Live TV, offers channels such as TMZ, FailArmy, and USA Today. Admittedly, the name’s not particularly compelling. “Free Live TV” sounds like one of those sites that hosts pirated content. At the moment, the service is ad-supported, but it wouldn’t surprise me if the company plans to offer a paid subscription under a snappier name further down the line. I mean, it’s what all the cool kids are doing.

You don’t currently have to have an account in order to watch the free content. At the moment, the service is limited to “a select audience,” but they expect to roll it out nationwide soon. If you’re within the audience, select the show you want from Redbox‘s content menu. The same content is currently available on the iOS and Android apps. Redbox also says Free Live TV will eventually be available on the likes of Roku and Apple TV.

So if you want to watch some shows, go here and see if you’re part of the select audience. You’ll have to turn off your ad blockers if you want the video player to load. The shows don’t play on demand, but run on a schedule. Still, for something that’s free and doesn’t require a login, it’s not bad.

It’s worth noting Redbox uses the Free Live TV landing page to advertise its online film rentals as well. So if you want to sign up for Redbox‘s rewards program (again, please note that you don’t have to), you can get points from watching online shows that you can redeem for the company’s signature physical DVD rentals.

Read next: Facebook uses its ad policies to block apps that compete with its dating service