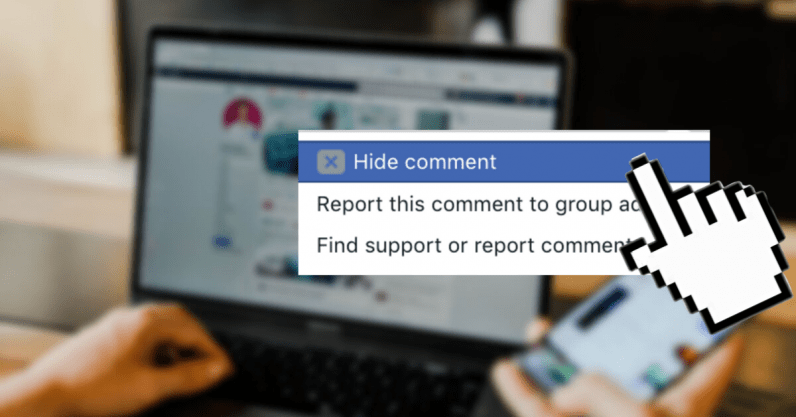 Ahhh… Facebook, a place to share “what’s on your mind” and stay up to date with your racist Grandma’s statuses. The social networking platform has approximately 2.1 billion daily active users, so inevitably, it can sometimes feel like a pit of negative and offensive comments — but thankfully, there’s a way to prevent these from appearing on your feed.

Instead of deleting or deactivating your Facebook account, the tech giant allows you to control what comments you see by giving you the ability to delete, hide, or report them. But first, let’s explain what each of these mean.

So, to delete a comment, this means it’ll be removed from the platform forever. But you can’t go around on Facebook simply deleting everyone’s comments, after all, you’re not God, or Zuckerberg. However, you can delete your own comments and comments from others on your uploads, be that a status, a photo album, or a life update.

Hiding a comment means it will disappear from your point of view. However, the person who posted it, along with any of your mutual friends, will still be able to view it. But what kind of comments are worth hiding? Well, maybe ones that could spoil a TV show you’re watching, for example.

And finally, reporting a comment is kind of like a citizen’s arrest. Well, not really… but it does mean that if you see an offensive comment, you can flag it to the Facebook police who will then decide if it has violated its community standards. If it does, it’ll be deleted.

Take control over what comments you see on Facebook

Hiding comments from any post on Facebook is easy — be that your own or someone else’s — and you can do this on desktop or from the social networking app.

To hide a comment from the Facebook app, simply press and hold down the comment you don’t want to see anymore, and then tap Hide. Once hidden, the comment will be replaced with text saying: “This comment has been hidden” and will remain in the comment section, but instead it’ll greyed out.

But, if again, you regret doing this. It can easily by unhidden by long-pressing the now-hidden message and tap Unhide comment.

Some comments require more action than simply hiding them. Unfortunately, you might come across an offensive message, even though Facebook has tools in place to automatically detect and remove offensive comments, sometimes some slip through the net.

To report a comment on desktop, click the three dots to the right of the comment box and click Find support or report comment. Once clicked, a box will appear asking you to explain what category this comment typically falls into such as: Violence, harassment, suicide or self-injury, or hate speech, etc. However, if you can’t find the category, there’s a search option to manually find what you’re looking for including options such as “Promoting drug use” and “Mocking victims.”

So, even though Facebook is using AI to combat hate speech online, sometimes you may stumble across something offensive. At least now you know how to control what you see.

Read next: An ant colony has memories its individual members don’t have