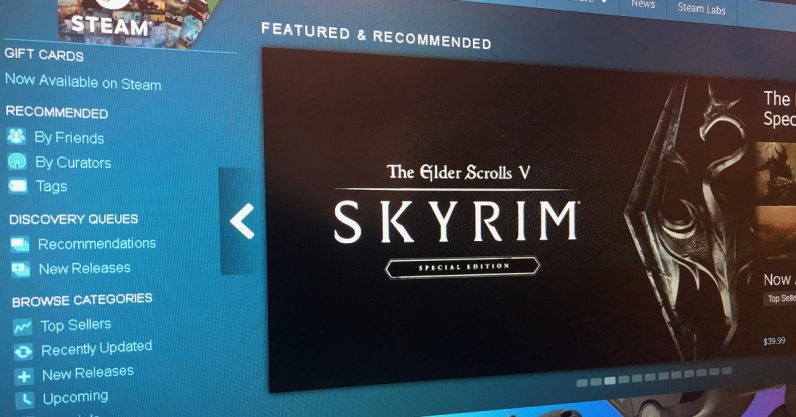 Steam recently rolled out a new option on its store to help sort recommendations. Up to now, the only way to stop seeing a game pop up in your recommendations was to choose the “Ignore” option, which also meant Steam would just assume you weren’t interested in that type of game.

Obviously this isn’t ideal — just because I don’t want to see Monster Hunter World keep popping up in my Steam queue doesn’t mean I don’t like the game. I just already have it on my PS4.

Now Valve is offering this specific option in the store: you can tell Steam you don’t want to see it because you already “Played on Another Platform.”

Games are fun, and you should play them wherever you prefer. Thanks to a recent update, you can tell Steam that you already played a game somewhere else. That way, we won't waste time suggesting it to you, but it can still help guide future recommendations. pic.twitter.com/IA9y08jOnA

The option is nested on the product page alongside the “Ignore” option, since it’s a softer variant of this. The game will no longer appear in your store queue, but because you can say you played it, Steam will take that into account while doing whatever dark sorcery is behind its recommendations.

Naturally, given that I’ve summarily ignored every Steam-recommended game I already owned on another platform, I wanted to go back and adjust my judgment. But I couldn’t remember every game I’ve ever ignored on Steam — so how does one find them?

Steam actually does keep a list of every product you’ve ever “Ignored” in its store. The list can be found in your “Account Details.” Under the section on store and purchase history, find the option called “Update store preferences.” (This can all be done both in the Steam desktop client and the app, by the way.)

Scroll down a bit, and you’ll find a section marked “Ignored Products.” This will show you how many games you’ve ignored, and give you the option to view the entire list.

Once you’ve found the list, Steam gives you the option to change your vote from the list itself — to decide whether you’re genuinely not interested or have just played it on another platform. This option wasn’t here the first time I checked the list after Steam rolled this out, and it’s a delight to see it included.

It’s good to see Steam pick up on some nuance, and not just assume because you don’t want to see a game you’ve already played in your queue that you must obviously not like the game.

Side note: you may see (as I did), several entries marked “Uninitialized.” As near as I can tell, this is for games that no longer have a Steam page.

Read next: The iPhone 11 could launch September 10, according to an iOS 13 clue