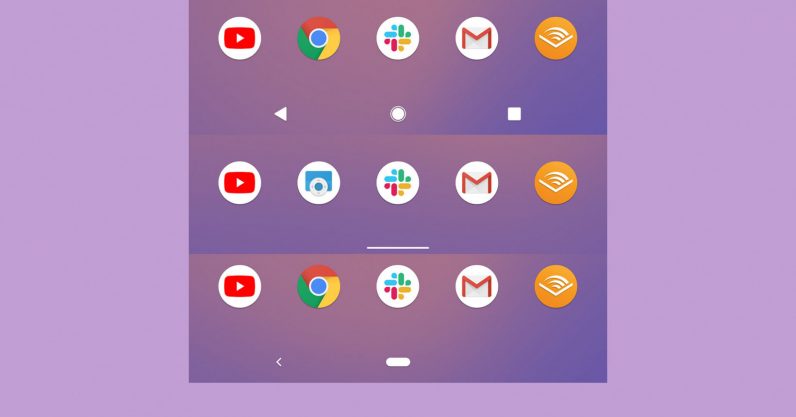 As Google pushed out beta after beta of Android Q, it became clear the company was taking a page out of Apple’s UI. This is most notable with regards to Android Q‘s new navigation system. If you already had mixed feelings about the two-button system in Android Pie, the iOS copycat gestures in Android Q will likely frustrate you even more.

The new gestures work so closely to their iPhone implementation, I’m surprised Apple hasn’t already sued Google. Swipe up from the bottom to go home, swipe up and hold to see recent apps, swipe from the sides go back. As of Beta 5, it’s nowhere near as smooth as Apple’s implementation, though I’ll give Google the benefit of the doubt while it works out the kinks.

Other than saving you a few pixels of screen real estate, it’s hard to see the advantage over the three-button system of old. In some respects, it’s straight up worse, causing conflicts with apps that require swiping from the edges for features – like the side menus in so many Android apps.

Thankfully, it seems Google doesn’t plan to force you to use the new gesture system, as it did with the Pixel 3. But then I suppose this is something we’ll have to see once the Pixel 4 comes out.

In the meantime, if you have one of the devices already capable of running Android Q, going back to the classic 3-button system – or the 2 button system of Android Pie – is easy enough.

Simply head to Settings > System > Gestures > System navigation (or just search ‘gestures’ from within the Settings menu). From there you’ll be able to switch between any of the free navigation systems. The settings may vary on future Android phones from different manufacturers, but they should be available through similar means.

While I appreciate that Google is giving us the option to switch (for now, anyway) here’s hoping it at least refines the gestures in time for the final release – and maybe comes up with something more original next time around.

Read next: This century-old oak tree is live-tweeting climate change