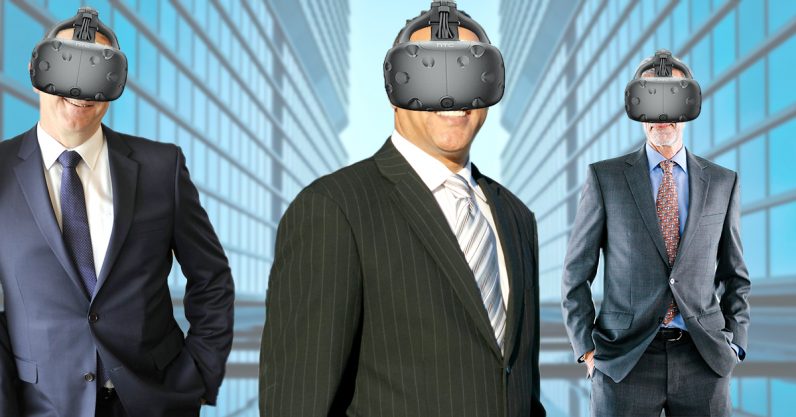 Reports of the death of virtual reality are greatly exaggerated. In fact, far from dying, the VR industry is poised for explosive growth in the near-term according to analysts.

Modern VR headsets arrived less than three years ago. But to hear pundits talk, you’d think the technology’s already reached its developmental zenith. Upon closer inspection, it turns out these people are usually referring to VR as a gaming platform. Condemning VR, on that basis, is like saying the robotics industry is a failure because giant robot fighting has yet to take off. We’re still hopeful.

Games are great; but VR is much, much more than the technological evolution of Pong.

VR as a platform

When most of us think about VR, we picture this:

As VR-pessimists are quick to point out, however, the current generation of VR gaming hardware is little better than a novelty when compared to dedicated consoles and PCs. So why are the two biggest players in the VR industry – HTC and Oculus – seemingly unilaterally fixated on the gaming market? It’s because gamers are better people.

Well, we’re better consumers. VR companies want to sell products to consumers because there’s a lot more people on the planet than there are businesses. But VR headsets – the real ones, not those slide-your-smartphone-inside glorified Viewmaster experiences – are not only expensive, they require a monster rig to run them. Gamers are a market segment that already has those machines.

Eventually, immersive gaming could gain mainstream appeal. But for now, the idea is to get headsets into people’s hands so they can be stress-tested, reviewed, and discussed. If HTC or Oculus waits around until the technology is perfect to release a product, someone else will get there first. And it’ll never be perfect.

Gamers are the hardware, OS, and UX beta testers of the VR world. However, VR, as an industry, is not reliant on HTC or Oculus’ ability to sell headsets to gamers. Just like Nvidia’s cutting-edge AI advancements are powered by graphics cards that were developed to meet the needs of gamers, Rift and Vive tread the same path.

VR as a non-gaming platform

The gaming market is worth a lot of money. Experts predict it’ll break $180 billion globally by 2022. And VR? Analysts say it’ll be worth $117 billion in the same timeframe. No sign of a dying technology there.

According to market research, this growth will be driven by business adoption — not gaming. A report published in MarketWatch indicated the following three factors will play the largest role:

And there’s more to the immediate future of VR than just education and business applications. Virtual reality is a vessel for biometric feedback and psychographic analysis, a portal for emotional empathy response generation, and an entertainment platform that goes far beyond games.

You put on a headset, perform a few guided tasks in VR, and then a series of “biometric algorithms” spit out a detailed neurology report on how your brain responds to stimuli. Not only is this the logical extension of gamified edutainment apps such as Cognify and Luminosity, it also provides a treasure trove of data.

TNW spoke with Amir Bozorgzadeh, CEO of VR startup Virtuleap, about his company’s entry into the VR space. Rather than make games, Virtuleap designs biometric algorithms that “translate body postures, gestures, and motion into psychographics and demographics about users in VR and AR environments.” Right. We weren’t sure what that meant either, so we asked.

We are looking at frequency changes and abnormalities in movements. Body movements that are triggered by the part of the autonomic nervous system, which controls involuntary actions … Our math can interpret these signals.

Virtuleap’s Attention Lab edutainment app will be available on the Oculus Go store later this year.

The best way to help people understand a complex problem is to let them see it for themselves. For example, if you were a tree, you might wish humans had more empathy for forests. Luckily for trees (and the future of our planet), HTC‘s VR for Impact is in the empathy-generation business. It curates pitches for VR experiences that have the potential to impact society, specifically those that support the United Nations’ Sustainable Development Goals, and funds the ones it selects.

The aptly named Tree, VR for Impact’s latest release, lets you see what it’s like to be a tree in a sprawling forest. You begin the experience as a freshly planted seedling and grow into a… well, we won’t spoil what happens. Suffice to say it’s not all soothing breezes and swaying branches.

These kinds of VR experiences can have a profound impact on how humans view the world we live in. Living life as a tree allows you to view the problem – humanity’s effect on the environment – from an entirely different point of view. Tree is currently available on HTC‘s Viveport.

Another example is Stanford’s Becoming Homeless. During one particularly heart-wrenching section of this experience, users find themselves homeless and traveling on a bus for warmth. Unfortunately players are caught between watching their bag in front of them, and keeping an eye on a dangerous man behind them. You’re forced to whip your head back and forth every few seconds in order to keep both the man and your bag in view (the man moves closer when you aren’t looking at him, your bag moves further when you are). It becomes apparent that being homeless is a living nightmare from which there is no respite.

This might not be a fun way to use the technology, but it’s an important one. Besides, you can still have fun with your headsets too, even if you’re not playing a game.

Believe it or not, there are other forms of entertainment beyond Final Fantasy and Fortnite. And Hollywood’s been quick to realize VR is worth investing in. STX Entertainment, a heavyweight studio that’s managed to become an empire worth billions in the short time since its founding in 2014, is bullish on VR for films and television. And its STXSurreal imprint has already proven there’s an audience for high-quality Hollywood VR content.

TNW called the first release in its Robert Rodriguez-helmed action series, The Limit, the first must-watch film of the VR era. The company has plans to launch several new experiences soon, including series from Kevin Smith (Clerks, Chasing Amy) and Dave Bautista (WWE, Guardians of the Galaxy).

And these examples are just the tip of the iceberg. We haven’t even talked about what Google, Microsoft, or Varjo (a company that makes a $5,995 headset) are up to. No matter how you look at it, VR is just getting started. Sure, VR gaming isn’t quite there yet. But virtual reality technology is here. It’s certainly not dead, dying, or over-hyped.

Read next: The PlayStation Vita started what Nintendo's Switch perfected