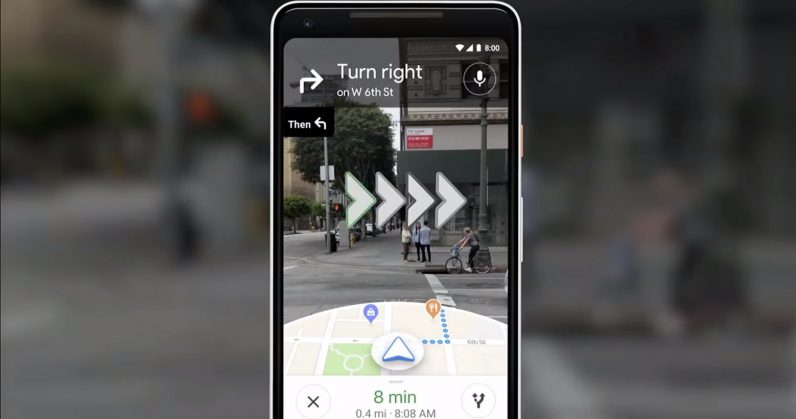 The Wall Street Journal’s David Pierce reported over the weekend that Google is set to roll out an augmented reality-based navigation feature to its Maps mobile apps to a small group in the coming days – and I’m looking forward to it fixing one of my main gripes with the service.

It was first demoed at the company’s IO developer conference last May, and looked like a compelling use case for AR tech. Essentially, if you plan to walk anywhere, Maps can use your phone’s camera to get a better understanding of exactly where you are. It can then display prominent signs and arrows on your screen to precisely guide you to your destination. No more walking in the wrong direction until Maps’ little blue dot gets its bearing, and then instructs you to sheepishly turn on your heel and head the opposite way like a schmuck.

That’s always been an issue for me when I travel. As if it isn’t already difficult to blend in when exploring a new city, Maps has me staring at my phone and praying the blue dot won’t lead me astray for several blocks before sending me back the other way.

When she took the stage to demonstrate this feature last year, Google’s VP for Lens & AR, Aparna Chennapragada, explained how the feature uses a Visual Positioning System (VPS) for accurate orientation: similar to humans, it looks for visual cues like the facades of landmarks and stores to figure out where you are.

It’s worth noting this feature is still in the works and will likely be refined before you might get to use it. It’s also not intended for driving or biking, so don’t expect to see changes in your navigation screen unless you’re walking.

We don’t yet know if this feature will become available outside the US. I imagine it will likely roll out to places that have extensive Street View coverage. That may leave India out of the loop for the time being. We’ve written to ask, and will update this post when we learn more.

Read next: How to track timezones around the world with these free apps