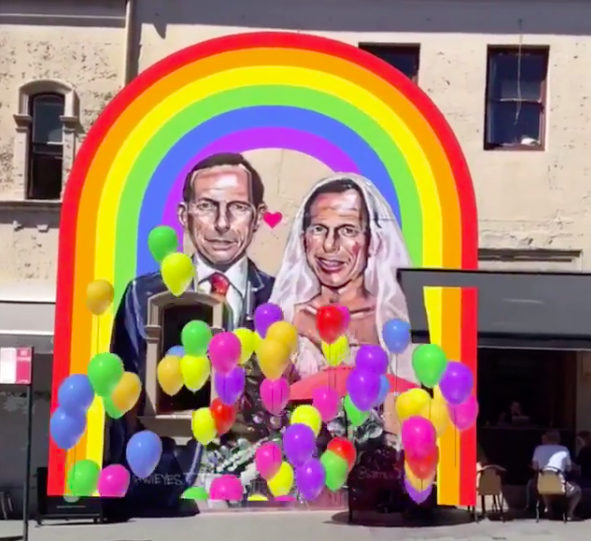 There’s no better way to rejoice at the majority of Australians voting ‘YES’ to same-sex marriage than a celebratory augmented reality over a mural of former Prime Minister, Tony Abbot.

While Abbot wasn’t shy leading the ‘NO’ campaign, it’s safe to say the AR only adds to his potential embarrassment about the satirical mural of himself, marrying himself.

Painted by Scott Marsh in September, the ingenious mural now comes to life by downloading the app, EyeJack, with the AR designed by arrbeesound. It’s quickly caught the attention of many, with a video of the experience already at 23,000 views and counting. Keep them coming below:

The results from the postal survey revealed that 79.5 percent of eligible voters had their say. An overwhelming 62 percent voted to allow same-sex marriage, while 38 percent were against any change to current legislation.

It’s now time for the current Prime Minister, Malcolm Turnbull, to introduce a private member’s bill to amend the current Marriage Act. Members of parliament will then be allowed to freely vote for or against the bill. Thankfully, Turnbull wants this to be a quick process:

While there’s definitely no guarantee the law will change, Turnbull’s prediction is that it will. Let’s hope the Australian Parliament listens closely to the ‘YES’ majority because I can imagine a lot worse than a humiliating art installation if they don’t…

Either way, this is a historic step forward for Australia. Hopefully, by Christmas, marriage equality will finally be a reality.

Read next: 5 tips to help successfully market an ICO