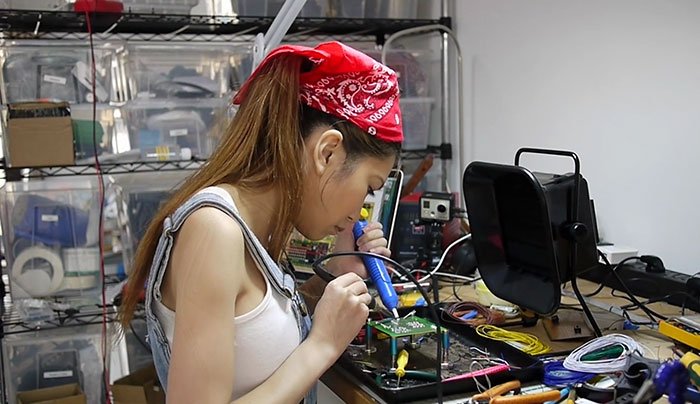 Dale Dougherty, founder of Make Magazine has been forced to issue a public apology after falsely accusing popular Chinese maker Naomi “Real Sexy Cyborg” Wu of not being a person, but rather a “persona” created by “several or many people.”

Naomi Wu is an engineer, designer, educator, and a prolific YouTuber. Her videos are unique, as they provide an accessible English-language insight into the Chinese technology world. On YouTube, she boasts almost 140,000 subscribers, with a total view count of nearly 14 million. She also has a large following on Twitter, with over 30,000 followers.

Dougherty’s since-deleted Tweet read “I am questioning who she [Naomi Wu] really is. Naomi is a persona, not a real person. She is several or many people.” He also claimed to have evidence of this, although he failed to disclose this publicly. This tweet has also since been deleted.

“I want to say as strongly as I can that we want Make: to be inclusive and provide an arena for all Makers to share their projects, values, challenges, and humanity in a safe and supportive environment. If we fail at that, we take it seriously. I failed on Sunday and learned a valuable lesson from all of you about that. I can do better — and I will.”

Naomi, I apologize for my recent tweets questioning your identity. I was wrong, and I'm sorry. @realsexycyborg https://t.co/hnEdn34sio

It’s not clear why Dale chose to pick this fight. It’s absolutely true Wu has been publicly critical in the past over the inadequate representation of female Chinese hackers at Make events held in mainland China. Speaking to TNW over Twitter DMs, Wu said she believes this was the catalyst for this dispute, saying: “I kept pushing for more inclusion – not just me, other underrepresented people. They didn’t like being pushed. This is payback.”

Wu claims that Dougherty’s accusations are having an impact on her career, with one technology company backing away from a sponsorship deal with the popular YouTuber. “[a] 3D printer company was going to pay me for several builds over the next few months using their product. I’m trying save it but everyone knows Dale here, and this is all over the WeChat groups,” she said.

“There’s no putting this away, there’s no retraction that’s going to make people forget. The Maker scene in China is all about Western validation and he repeatedly called me out as fake and left that out there for days. He said it, people will repeat it. This doubt is now attached to my name and all my work.”

Wu is also unimpressed with Dougherty’s apology, which she perceives to be inadequate, and doesn’t address the very specific claims he made, saying “he said ‘he failed.’ He didn’t say he was wrong, or I am not fake. It’s like he dropped a glass or something.”

“No one is going to really hold a man like him accountable. He choose his victim carefully. Lets be serious, he would have never tried this with a white lady from San Francisco. He knew when he did it worst case would be a half-assed apology. He was right. There’s no chance the community will hold him accountable, no matter how much harm he’s done me – so long as he mutters something vague about mistakes.”

TNW reached out to Dale Dougherty for comment prior to the publication of this article. At the time of publication, he has not yet responded.