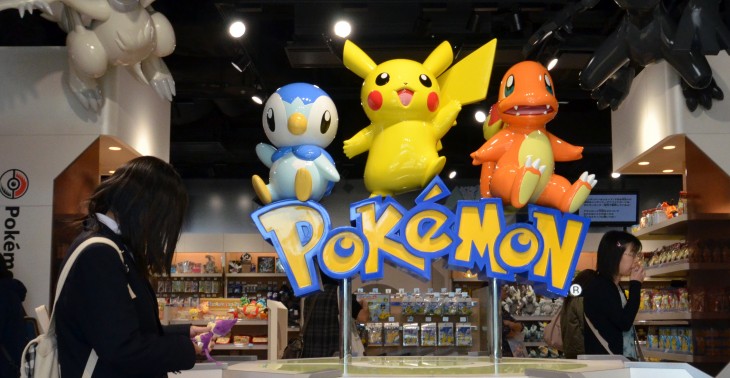 Last week Sony stubbornly gave up seven years of resistance when it finally made its music library directly available for iTunes users in Japan. While that local news piece fell below the radar of global media, it was a symbolic sign of the times; the once dominant entertainment brand bowing to Apple’s dominance.

Well, here’s another small but interesting move out of Japan, Nintendo has released its very first iOS app today. Well, sort of.

Pokédex, the title that Nintendo-owned Creatures Inc. is bringing to the iPhone, iPad and iPod Touch, is one of those things that is designed for the Pokeman-crazed Japanese. It’s essentially an information app, which shows stats, figures and details for more than 650 Pokemon characters – not so it’s not exactly GTA or FIFA 13 for iOS. However, like Sony’s iTunes move — which was softened when it made music available for the Apple service via a third party system this summer — it could be the sign of a more significant trend.

Sony championed its gaming prowess this morning when it announced that its PlayStation 3 console had passed 70 million units sold worldwide. Impressive, but that masks the fact that Apple continues to encroach on the games industry, just as it has cut into Sony’s media player and content businesses.

Ars Technica rightly points out that this is not Sony’s first foray into the App Store, it faced questions about plans to develop iOS games when Pokemon — a company it owns one third of — launched Tap, a title for the Apple platform, in July 2011.

This time around it is slightly different though. Nintendo owns Pokédex developer Creatures Inc, and, while Tap was available for a short time only, Pokédex is fitted up with a barrage of in-app purchases to bring in cash. As Eurogamer explains, buyers must part with nearly $30 for access to all of the data:

Once downloaded you’ll find a version of the Pokémon encyclopedia which covers all of the latest generation of critters (from DS games Pokémon Black and White). This costs 170 yen (about £1.30).

Four extra packs with monsters from previous generations are then available to download for 500 yen (£3.90) each – meaning users will pay around £17 for the whole thing.

While this isn’t exactly Nintendo itself launching an iOS title and it is aimed at Japanese audiences, the move can be seen as a step closer to Nintendo titles gracing the App Store. Nothing looks like changing immediately, since Nintendo continues to sell boatloads of hardware and content, but we’re certainly looking at things with a glass half full – Nintendo isn’t so obstinate as to fail to acknowledge the benefits of Apple’s content ecosystem.

The HTML5 standard was recently backed by Japanese games giant GREE, which has launched a Web app version of its 200 million-user strong service. Perhaps Nintendo might explore that option, which circumvents the Apple leash, but then again Japanese companies are known for being stubborn – even in the face of internal pressure.

Given Nintendo’s stature within the gaming industry (most of us have owned or at least played a NES, SNES, Gameboy etc) the topic has fired up a number of TNW’s staff in the past. Here’s some wider, opinionated reading on the subject from our team – what’s your take?

– Nintendo, I love you – but it’s time to switch to iOS

– Forget the App Store, Nintendo should build a phone

Read next: After selling its Facebook and other shares, Mail.Ru considers special dividends and increasing its VKontakte stake