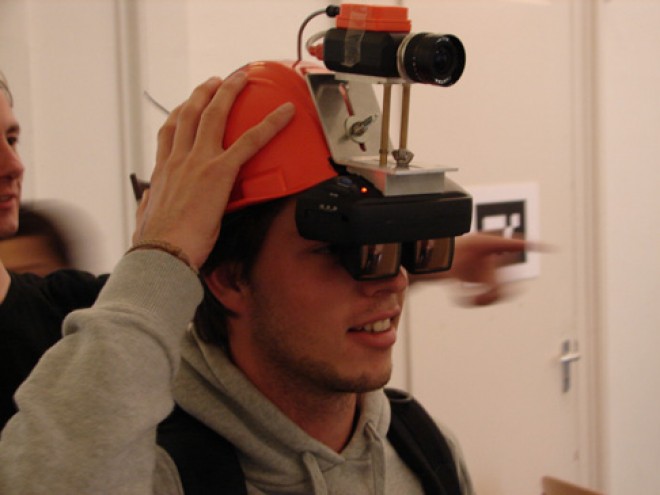 Kiwiple is largely unknown on the global stage for now, but the company has an ambition to take its unique vision of augmented reality-based social networks to a larger audience worldwide.

The company’s social network service — Ovjet — grabbed national attention in Korea when it was part of a television advert in 2010 as a new Android service on SK Telecom’s network. The advert, which is below, showed a man scanning the room with a cellphone camera to find for information before he used it on his co-worker.

Through the publicity, Ovjet received a lot of interest and by December last year the app had been downloaded more than 11 million times. Ovjet integrates social media and augmented reality to provide a user with an experience that uses the technology to provide real-time information and communicate with others.

Now available for iOS, the service can loosely be described as a mix between Foursquare, Twitter, Facebook, Instagram, and location-based dating apps, which are popular in Korea.

While there are several other augmented reality apps on the market which can be used to find the location of restaurants and bars nearby, Ovjet takes the technology a step further by incorporating many other areas that aren’t usually covered.

The app includes a wide range of places, including apartment buildings, parks, pharmacies, bus and subway stops, churches, banks and many more. Tapping the desired location brings up information about it, including phone number, and an address linked to a Google Maps location, while news articles related to the area are also shown.

Though the app does not work directly on people as the advert playfully suggests, Kiwiple definitely wants Ovjet to connect users and thus the app has been designed as a social network. Users can “follow” the page of any location, person or other object — in a similar fashion to Twitter  — and the latest info can be seen as a feed.

Most other features of social networks, such as comments, likes and creating groups, are also integrated into the platform. Another key feature is the option to search and locate other Ovjet users in your immediate vicinity, though this is limited to users who agree to reveal their location via the service.

Users can express themselves with tags that, in typically Asian fashion, allow them to label themselves with categories like cute, kind, athletic and more. These descriptive tags are designed to help users find and choose people to interact with on the service.

For the more superstitious, users can even point their device towards the sky to view the position of the stars and follow others with specific star signs. Other bonus features include a QR code scanner and “Gifticons”, electronic gift coupons that can be sent for friends to use at local stores.

Kiwiple was founded in August 2009 with a team of just seven people. Although the company initially formed its own capital of 200 million won ($178,000) Kiwiple secured a 300 million won ($267,000) investment just two months after forming.

CEO Shin explains that this welcomed news may have had a side-effect on the company:

I’m not sure if it was a good thing, because we received funding so quickly and so easily, we thought that if you just worked hard you would receive investment.

Nevertheless, Kiwiple has continued to show promise and received 1.5 billion won ($1,336,000) of investment capital last summer and it reached break-even point in November last year. The company is continuing to develop the app and recently released a lighter version of Ovjet which was well received.

The company is well known in its native Korea, where many have seen and used the startup’s product already, as Shin outlines:

This year the most important goal for us is entering the U.S and European markets. Having already reached break-even point through advertising, we now intend to focus on stabilizing growth.

We’ve seen a range of mobile-based starts in Korea look to overseas markets and, with Google now helping the nation’s startps, Kiwiple could be one of the next wave of services to grow its international ambition.

We’ll keep you posted on its global plans but for now it is available in Korea only.

Note: The headline image is not a Kiwiple user as the service just needs a phone…sadly there’s no use for clunky AR headsets, cool as they are.

Read next: Google is told to provide its Android roadmap as evidence in Apple-Motorola lawsuit