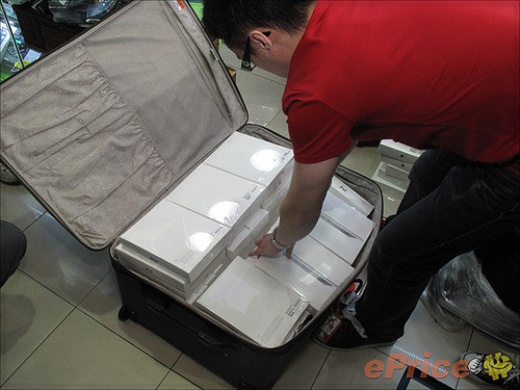 Hong Kong is not among the first 26 countries that will be officially launching an iPad 2 by March 25, but not so surprisingly, it’s already being sold in the gray market… at almost twice the price.

Just a few days after the official iPad 2 launches in the US, Apple distributor Kurt Lo, dubbed as the ‘master’ of the gray market in Hong Kong, has already received 200 orders of the highly sought-after device. Reports say that he has prepared eight couriers in New York, Chicago, San Francisco and Los Angeles to hop on planes to Hong Kong after securing about 200 iPad 2s that he promised to deliver to consumers by the 13th. If you want to be among the first to own the gadget, the cheapest you could get is the 16GB Wi-Fi only edition at a whopping HKD$7,980 (about $1025), which is more than double the US price of $499.

Moreover, those who want to get the white version would have to pay a premium of HKD$1500-2000 (about $192-256) for each. Scalping newly released gadgets is not a new concept in Hong Kong. With the first iPad, there were some asian countries that didn’t get an official release until as late as December, nine months after the official US release. That’s a really long wait — a perfect opportunity for the gray market to milk eager Apple fanboys.

Interestingly, iFun reported last year that Hong Kong is among the cheapest places to get an iPhone 4 and other Apple devices, and we’re almost certain that it will be the same for the iPad 2 when it officially gets launched in the country.

Read next: Developing on Twitter? Shut up and listen.