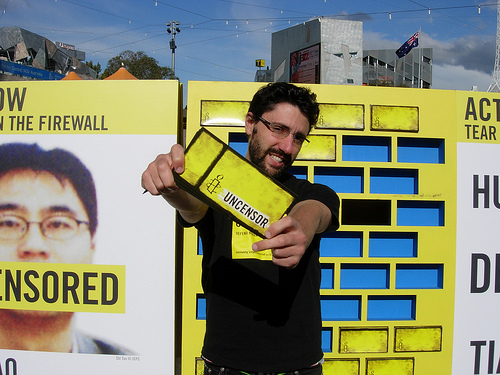 China’s Great Firewall is well known – the country enforces strict measures to ensure citizens are unable to sign up to social networks or enjoy websites hosting “harmful” information outside the country.

As 2010 came to a close, Chinese officials did what they did best, hosting formal meetings demonstrating how their governmental departments had performed over the year, presenting statistics to back up how well they had done. One such person was Wang Chen, the deputy head of the Communist party’s propaganda department and head of the State Council Information Office, they guy who helped regulate the Internet for Chinese users and decide what content should be blocked.

On Thursday, Wang presented his statistics to the media, particularly focusing on how much Internet content he had helped censor. The head almost seemed to boast about how much content had been blocked, stating the following:

“By November, […] 350m pieces of harmful information, including text, pictures and videos, had been deleted,” he said. “There was a notable improvement in the online cultural environment.”

With Mark Zuckerberg recently visiting the country, Wang refused to discuss whether Facebook would be allowed special exclusion from the strict firewall, also dismissing the fact that Zuckerberg would have used his visit to discuss possible exemption from a Great Firewall blocking.

Earlier in 2010, we reported on the sentencing of a female activist who was given a year in a labour camp for one retweet. Retweeting a message on Twitter posted by her boyfriend, the woman went missing for a few days, even missing her wedding day – such is the level of censorship in the country.

It could be a while until we see Google or Facebook making headway in China, at least at the moment.

Read next: The MacBook Hair