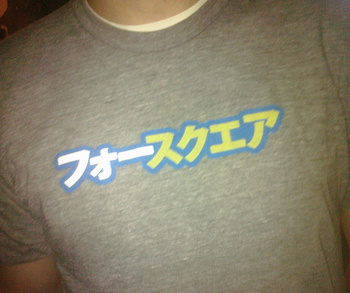 Japan has always been a difficult nut for US technology companies to crack. Finally, it looks like that might be changing.

Current success for Apple and Foursquare shows that US technology companies are starting to make a real impact in a way they previously couldn’t imagine.

The Japanese are going crazy for the iPad. I was in Japan last week when it launched there and the hype was truly unbelievable. Every news bulletin on every major TV channel throughout launch day featured shots of the queues outside stores. It wasn’t just geeks catching iPad mania; one mainstream daytime TV show even devoted a whole 20 minute segment to interviews with magazine publishers, shots of surgeons using iPad apps to assist them during operations and the presenters cooing over how lovely it was.

This is the latest episode in Japan’s love affair with Apple. iPods and iPhones are significantly more noticeable on the streets of Japanese cities now compared with two years ago when I was last there. While this may sound familiar to Western readers (the same has happened in many countries), Japan really is a special case. With more than enough homegrown hardware from companies like Sony and Sanyo, the Japanese have never really felt the need to look beyond their own shores. With Apple’s success, that’s changing.

Foursquare checks in to the Japanese psyche

As with hardware, the Japanese have traditionally preferred to stick to their own web services. Sure, US brands like Twitter and Yahoo are popular in Japan but both used joint venture agreements with local companies to tailor the products to the distinct tastes of Japanese users.

That’s why I was surprised just how popular Foursquare was in Japan. I was expecting this English language service from a New York startup with no local Japanese presence to be barely used except from by Western tourists. Instead I found myself competing for mayorships with the many Japanese Foursquare users. Even small towns far from the urban sprawl of Tokyo had many locations already added by users, while the busy Shinjuku station in central Tokyo regularly had over 20 recent checkins at 11.30pm – imagine what it might have been like if I’d checked during rush hour.

In fact, the Japanese have repurposed Foursquare for their own country to the point that it’s almost impossible to play there if you don’t read Japanese – almost all locations are created using Japanese text. This has been done entirely by Foursquare users who have edited and expanded on the English language data Foursquare originally seeded Tokyo with. Meanwhile, a local developer has translated the Foursquare API into Japanese. For more insights into Foursquare use in Japan see this post from January this year.

So, why is Japan turning to US technology? A Wall Street Journal article last week suggested that the Apple’s success is down to its brand value – it’s trendy to carry an iPad just as it is a Louis Vuitton bag. Another possibility could be that there simply isn’t enough innovation and excitement to be found in Japan’s homegrown technology industry.

Whatever the cause, flash-in-the-pan craze or long-term change, Japan’s craze for US tech is a trend to watch.

Read next: Smokescreen: a Flash player written in JavaScript and HTML5.