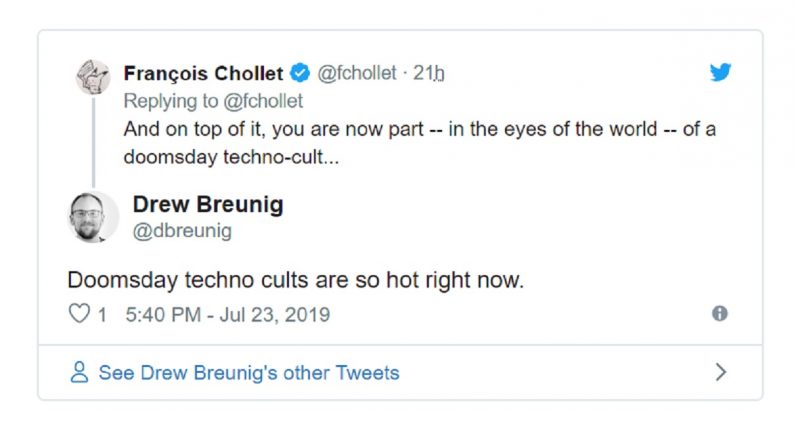 Microsoft recently announced plans to invest $1 billion in OpenAI, an AI startup co-founded by Elon Musk (no longer involved) and focused on developing human-level artificial intelligence. Normally, this would be an article about robots that can think and how two of the biggest players in the AI industry joining forces could lead to amazing things. But this deal is really creepy. So let’s talk about that instead.

First, OpenAI was founded as a non-profit. Under CEO Sam Altman the company’s recently rearranged to become what’s essentially a for-profit business nested under a non-profit with oversight power. In other words, as Wired reported, OpenAI can operate like a for-profit business but it has to adhere to the company’s original charter of developing AGI that benefits all humankind.

Interestingly enough, the company that OpenAI appears to be trying to catch up to with this deal is Google — another for-profit business once guided by the principle “don’t be evil.” Despite that motto having not worked out, Google‘s current resources and talent dwarf that of nearly every other AI venture, OpenAI‘s included. Enter Microsoft.

The deal seems like a marriage made in heaven: Microsoft has the coffers and hardware, OpenAI has Ilya Sutskever and dozens of other researchers who’d be the smartest people in most rooms. But, based on everything we’ve seen, this isn’t a joint research deal, or a developmental partnership, or even a pledge to work on the same problems together.

It appears to be a deal in which OpenAI will develop all or some of its technology on Azure for Microsoft to sell, distribute, or choose to open source. In return Microsoft will hand OpenAI cash over the next decade to eventually equal about $1B, but it expects to get all of it back as OpenAI pays for using Azure or other compute services.

Here’s what Microsoft’s blog post on the deal had to say:

OpenAI’s take was a little different:

OpenAI is producing a sequence of increasingly powerful AI technologies, which requires a lot of capital for computational power. The most obvious way to cover costs is to build a product, but that would mean changing our focus. Instead, we intend to license some of our pre-AGI technologies, with Microsoft becoming our preferred partner for commercializing them.

And Microsoft CEO Satya Nadella just made things fuzzier. According to the New York Times:

Mr. Nadella said Microsoft would not necessarily invest that billion dollars all at once. It could be doled out over the course of a decade or more…. will be fed back into its own business, as OpenAI purchases computing power.

What’s really going on here? Who knows. New York Times writer Cade Metz had a take that might explain it:

With the deal, both OpenAI and Microsoft are looking for a little PR.

And AI expert Stephen Merity had an absolutely satisfying thread on the subject where he seemingly points out that the only thing keeping OpenAI in adherence with its non-profit, open-source roots is the fact that it promises not to act any different now that it’s ready to commercialize. Big tech promises eh, what are those worth?

What is OpenAI? I don't know anymore.
A non-profit that leveraged good will whilst silently giving out equity for years prepping a shift to for-profit that is now seeking to license closed tech through a third party by segmenting tech under a banner of pre/post "AGI" technology? https://t.co/X6JIIuvcAd

But, hands-down, the most entertaining take on the deal to be found on Twitter was a simple three-tweet interjection by Google AI expert Francois Chollet (opinions are his own, according to bio):

Many people in the AI community are confused by OpenAI's pivot from non-profit to for-profit, its cult-like, beyond-parody PR about "capturing the lightcone of all future value in the universe", and its billion-dollar partnership with Azure… https://t.co/F6un60jlc5

And on top of it, you are now part — in the eyes of the world — of a doomsday techno-cult…

Is OpenAI a doomsday techno-cult? Probably not. But all of this creepy, PR-filled nonsense smacks of the kind of closed-door, marketing crap that makes idealistic developers leave big tech to work in academia or the non-profit sector. For many fans of OpenAI, this is like your favorite punk band selling out and becoming used car salespeople. I’m kind of hoping it’s a doomsday techno-cult instead:

Read next: Microsoft removes Cortana from the Xbox One in latest update