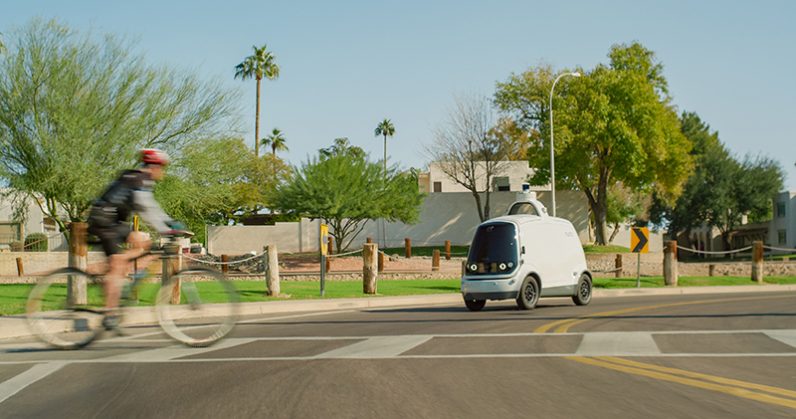 Robotics company Nuro will soon unleash its self-driving vehicles on the streets of Houston. This isn’t a ride-sharing partnership, or a new Tesla competitor, but a trial run at the future we’re all waiting for.

Starting this fall, Domino’s plans to employ a fleet of Nuro vehicles, each electric and self-driving, to deliver piping-hot pizza directly from its ovens to your doors. Each of the electric autos has a top speed of around 25 miles-per-hour, and they’ll soon share the roads with human-driven cars.

These vehicles, however, aren’t built for humans. Each is about half the height and width of a typical car they lack both the space and the hardware (including seats and steering wheels) for human pilots. According to Nuro, the diminutive vehicles were designed to leave additional space for the machines to navigate around obstructions and avoid collisions with human drivers.

After placing the order, customers can track the driverless vehicle using the Domino’s app. Once it arrives at the desired location, customers unlock a compartment within the vehicle using a PIN code provided by the app.

We are always looking for new ways to innovate and evolve the delivery experience for our customers. Nuro’s vehicles are specially designed to optimize the food delivery experience, which makes them a valuable partner in our autonomous vehicle journey.

Nuro, founded in Mountain View, California, isn’t exactly a household name. But to anyone paying attention, it’s a key player in the autonomous vehicle space. Founded by Jiajun Zhu and David Ferguson — both early hires in Google’s former self-driving project, Waymo — the company now boasts more than 200 employees, including top talent from the likes of Google, Apple, Tesla, and others.

For months it’s been running a test, of sorts, delivering groceries to Kroger customers in Phoenix and Houston.

This fall, it’ll branch into pizza delivery, delivering its first pizzas to Domino’s customers who place online orders in Houston. Initially, the test will be limited to a single location. But if it’s successful, it could pave the way for other autonomous delivery vehicles, and not just from pizza chains. The test, if nothing else, offers an optimistic view for Houston residents tired of the city’s traffic-clogged roadways. Houston, the country’s fourth-largest city by population is a sprawling metropolis home to more than two million residents. To say traffic has become a bit of a problem in recent years is putting it lightly.

For Domino’s, which delivers three million pizzas daily (globally), autonomous delivery is clearly a big part of its future. Last year the company partnered with Ford to trial autonomous delivery in Michigan and Miami. “The opportunity to bring our customers the choice of an unmanned delivery experience, and our operators an additional delivery solution during a busy store rush, is an important part of our autonomous vehicle testing,” Vasconi added.

So far, the vehicles are only being deployed for testing. It’ll likely take years before any chain store or restaurant fully embraces them to the point where they displace human drivers. But the writing is on the wall, and these jobs should certainly be considered endangered.

But it’s not all bad. Being a delivery driver, according to Bureau of Labor Statistics data, is one of the most dangerous jobs in America.

Maybe we leave the dangerous stuff to the robots, yeah?