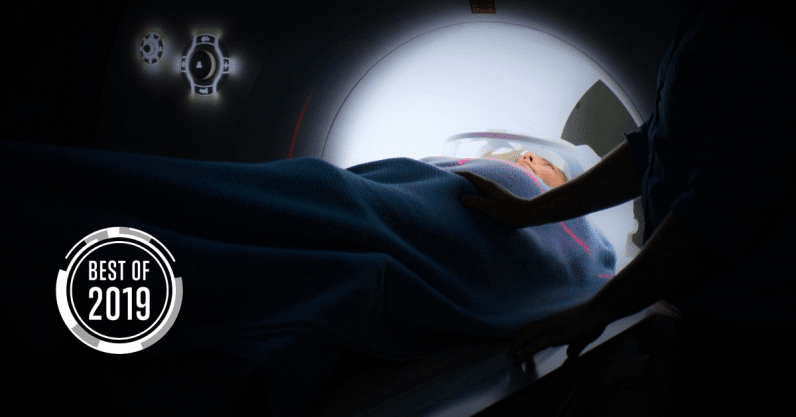 Cancer is a worldwide issue. Statistics show that 17 million cases of the disease were diagnosed across the globe last year alone. Depressingly, the same research suggests there will be 27.5 million new cancer cases diagnosed each year by 2040.

Although the stats don’t necessarily spell good news, it’s important to note that diagnosis, treatment, and in turn, patient outcomes have improved significantly. If we look back at the 1970s, less than a quarter of people with the disease survived. Now, more than four decades later, and thanks to technological progress and advancement in fields such as AI, survival in the UK has doubled.

My dad was diagnosed with advanced pancreatic cancer in August 2017. As a daughter, I was absolutely devastated, but as a technology journalist and self-confessed control freak, I spent much of his illness desperately researching clinical trials or innovative treatment options that could help him outsmart and beat the disease.

During my dad’s illness, I realized cancer treatment had come on leaps and bounds, but I also came to terms with the fact that while emerging technologies were promising to transform the healthcare industry, much of what my Dad needed to beat the illness was still light years away.

Now, and with the benefit of hindsight, I know that the last thing most people in a similar situation want to do is traipse the deepest corners of the internet in hope of finding a solution, which is actually several years away from coming to fruition.

This is why I’ve decided to focus on readily available AI that’s already having an impact on the ways in which cancer is being diagnosed and treated.

But, before we take a look at how AI is improving cancer care, it’s important to know how, why, and where cancer arises.

All cancers are born in cells inside the human body. In fact, the disease is sparked by changes in one cell or a small group of cells.

Typically, humans have just the right number of each type of cell. This is because cells produce signals to control how much, and how often the cells divide. If any of these signals are faulty or missing, cells may begin to grow and multiply too much, forming a lump (aka tumor).

A primary tumour is where the cancer begins. Other types of cancer, such as leukaemia, start from blood cells and don’t go on to form solid tumors.

All cells have a control center called a nucleus, which is where chromosomes, made up of thousands of genes, reside. Genes contain long strings of DNA – coded messages that determine how each cell behaves.

Each gene is an instruction that tells the cell how to make something. Normally, genes ensure cells grow and reproduce in an orderly, and controlled manner. But, sometimes a change happens in the genes when a cell divides. This is called a mutation, and means a gene has been damaged, lost, or been copied twice.

Gene mutations can happen entirely by chance when a cell is dividing. Some mutations occur when the cell no longer understands its instructions and begins to grow uncontrollably.

Approximately half a dozen different mutations have to take place before a normal cell turns into a cancer cell.

Mutations can also be caused by the processes of life inside a cell or external lifestyle factors, such as the chemicals found in tobacco smoke. Some people can also inherit certain faults in particular genes that will make them more likely to develop cancer during their lifetime.

Thanks to screening programmes, scientific breakthroughs, and technological advances in areas such as genetics, and medical imaging, cancer is much more likely to be diagnosed at a much earlier stage than it was several decades ago.

However, accuracy in medical imaging diagnosis remains low, with professionals seeing  20-30 percent false negatives in chest X-rays and mammographies. False positive diagnosis (wrongly stating that there is a problem) is also common.

AI can help counteract this, and the fact that healthcare is data-rich, is an added bonus. The vast majority of AI applications within healthcare leverage machine learning algorithms. The more data they are exposed to, the more likely they are to unearth hidden patterns within it that can then be used to perform a task without being explicitly programmed to do so.

Over the years, many different machine learning algorithms have been proposed, but the most traditional forms, such as logistic regression, have proved the most useful in terms of general clinical oncology research.

“One of the biggest challenges that we wish to address when it comes to a cancer diagnosis is ‘early detection.’ If a patient is diagnosed early, the chance of survival increases exponentially. It is known that more than 80 percent of breast, ovarian, prostate, lung cancer deaths are entirely preventable if detected early. Early detection and diagnosis is key to higher cancer survival rate,” said Brandon Suh, CEO of Lunit, whose chest imaging solution Lunit INSIGHT CXR is currently being used in hospitals in Mexico, Dubai, and South Korea.

With lung cancer, which is the leading cause of cancer deaths worldwide, the specific challenge lies in finding malignant nodules early on.

Aidence, an Amsterdam-based startup, which has developed medical image analysis software based on deep learning is already seemingly making a difference. Veye Chest, its first solution, helps radiologists detect and report pulmonary nodules on a CT chest image, and is already deployed in 10 hospitals, the startup says.

“The promise of AI or deep learning is that they can mimic repetitive and easy tasks for the radiologists, in this case detection and quantification of pulmonary nodules,” Nynke Breimer, Aidence’s director of business development told The Next Web, adding the system could potentially also translate into improved care as it frees up healthcare professionals’ time.

But although the product shows significant promise, the development of AI solutions in radiology in general is still in its infancy. Aidence admits its models “aren’t perfect yet,” meaning the system still makes mistakes in the form of false positive and false negatives.

Interestingly, though, researchers at the University of Pittsburgh and UPMH Hillman Cancer Centre have found a way to substantially reduce false positives without allegedly missing a single case of cancer. Currently, 96 percent of people who screen positive for lung cancer don’t actually have a malignant growth. Researchers say machine learning can rule out cancer in a third of them, helping to reduce diagnosis time, costs, and patients’ anxiety.

“We were able to rule out cancer in about a third of patients, so they wouldn’t need biopsies, they wouldn’t need PET scans or a short-interval CT scan. They just need to come back in a year,” said senior author David Wilson, M.D., M.P.H., associate professor of medicine, cardiothoracic surgery and clinical and translational science at Pitt and co-director of the Lung Cancer Center at UPMC Hillman.

How AI can help – and is helping

One of AI‘s core capacities is that it is able to process vast and complicated information in a short amount of time. With proper guidance, AI is able to surpass a human’s reading capacity, meaning that, as it continues to advance, it can see more precisely what the naked human eye can’t, with even greater proficiency that is defined by a high level of accuracy.

Essentially, using such methods is far less traumatic and invasive for the patient, and can also help to speed up the diagnosis process, ensuring that those who do receive a diagnosis, may be able to start their treatment sooner.

Additionally, Suh says AI is also incredibly useful when it comes to precision medicine, whereby doctors use the genetic changes in the patient’s tumor to determine an adequate treatment plan.

In the past, the decision to use a specific drug, or treatment, depended on relatively limited information, often influenced by the subjective judgement of the individual physician.

“Since AI is capable of processing complex information, it can objectively analyze vast amount of data that is already readily available, such as pathology data, and accurately identify a deep pattern which can be decisive in determining patient response to certain drugs,” Suh added.

Although some AI solutions are already available, it goes without saying that the industry has a long way to go.

The first thing AI needs to overcome is the issue of trust. It needs to prove itself to doctors and patients. This inherent lack of trust, in my opinion, currently constitutes the biggest hurdle to full adoption.

AI shouldn’t be seen as a standalone solution for diagnosing or treating patients in a completely unsupervised environment. Rather it’s a solution created to be a smart, and helpful assistant to physicians, who have an invaluable, and holistic view, of the patient’s condition and past medical history.

It’s a prime example of how humans and technology can work together, and not against each other. The smart thing to do would be to see AI as what it is: a tool that can help in areas where human capabilities remain limited.

If I think about the future and what I hope cancer treatment will look like, I’d like to see AI being deployed to expedite diagnosis, treatment, and even a cure. But more importantly, I’d like to see the technology being more widely available and applied to boost survival rates, improve treatment responses, and reduce side effects.

Unfortunately, my dad din’t make it, but I really hope more patients and their families can be spared the suffering he (and we) endured. He was let down by his NHS GP, who failed to pick up on apparent symptoms of his disease, and instead prescribed tablets used to treat indigestion.

Cancer is smart. It may be too late for my dad, but my only hope is that technology will continue to improve and save lives.

AI is becoming ubiquitous – in our devices, homes, streets, and cities. Attend TNW2019, our tech conference in Amsterdam, and find out more about how AI is impacting us and the world we live in. Check it out.

Read next: Are 'women in tech' events helpful or hurtful to gender equality?