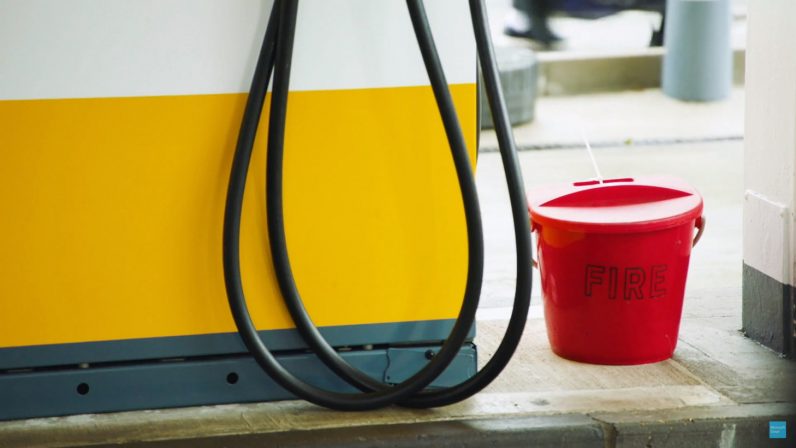 A lit cigarette burns at around 600-degrees Celsius (1,100 F). The auto-ignition point for gasoline is less than half that. Somehow, despite these facts, people smoke while pumping gas. In fact, it’s such a prevalent problem that Microsoft developed an AI-powered alarm system to help gas station employees crack down on offenders.

It’s difficult to imagine the amount of idiotic hubris it takes to disregard basic thermodynamics, but some people simply won’t be bothered by certain doom. Those people are called smokers, and Microsoft’s Azure team figured out that some good old-fashioned cloud-based artificial intelligence at the edge was the best way to deal with them.

Basically, Microsoft used cameras to constantly observe people and whenever certain behaviors arose – lighting a cigarette, for example – onboard AI flags the image and uploads it to the cloud where more robust AI determines if an alarm should be sounded.

Microsoft wasn’t specific about the alarm – but hopefully it’s something ridiculing like a profanity-laden rant from Samuel L. Jackson. I’m not usually for shaming people, but just about everyone needs to get gasoline, we shouldn’t all have to risk our lives because someone’s addiction can’t wait five minutes.

In order to detect the specific behaviors that could lead to an “oops” moment resulting in the ignition of thousands of gallons of gasoline, Microsoft had to develop a low-power image recognition system that could run locally within a framework that was capable of working with the cloud.

That’s a fancy way of saying a gas station can’t afford the computers it would take to run AI models powerful enough for the job, but there’s too much data to make it feasible to upload all the footage to the cloud. Microsoft’s solution is to use simpler algorithms to detect possible smokers at the pump, and then send those frames to the cloud for analysis.

It’s an elegant solution to a problem that shouldn’t exist. Currently the pilot program involves two Shell stations, one in Singapore and the other in Thailand, but this ought to be standard anywhere there’s smokers and gasoline pumps.

You can read more about Microsoft’s partnership with Shell on the company’s AI blog.

Read next: Here's why millions of PC gamers still love their old 360 controllers