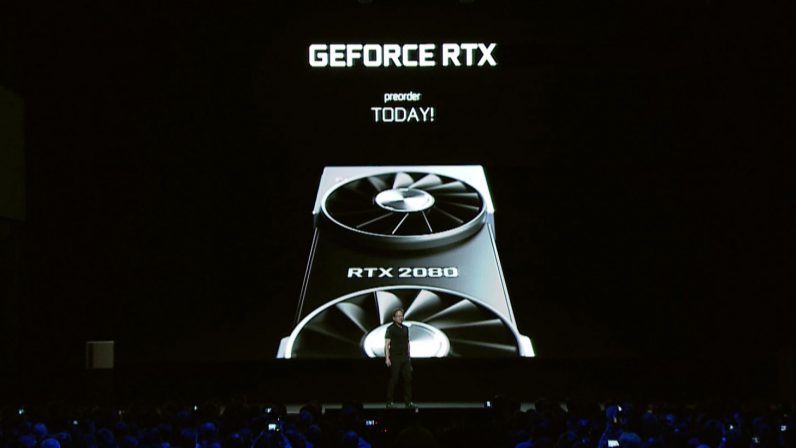 Nvidia today revealed its newest GeForce series GPUs at Gamescom, the RTX series built on its Turing architecture. And, with it, the newest buzz-phrase in graphics: real-time ray tracing.

According to Nvidia the RTX update is the biggest since CUDA. Real-time ray tracing brings cinema quality light and shadow reflections to gaming, but that’s not the only update. The new Turing architecture, developed over the last 10 years, brings a leap in performance that can only be described as incredible.

Deep learning is the single most powerful computing technology that has come on the scene in the last 30 years.

Thanks to neural networks trained using Nvidia‘s DGX2 supercomputer, the new RTX cards run deep learning models that handle a substantial amount of the heavy lifting when it comes to lighting effects. Huang says that, in the future, all gaming graphics will be generated through neural networks.

The sheer wow factor of the performance produced by the new cards can’t be overstated. Huang described the Turing platform the RTX series is built on as a “monster,” and he wasn’t kidding. The Turing cards produce graphics that outperform the GTX 1080 Ti  in every possible way, including the eyeball test.

We’ll update this post once we have the full specifications on each of the new cards. In the meantime, here’s hoping the price tag on the GTX 1080 cards will come down a bit now that it’s yesterday’s news.

Read next: Fitbit's Charge 3 is a smarter fitness tracker for $150