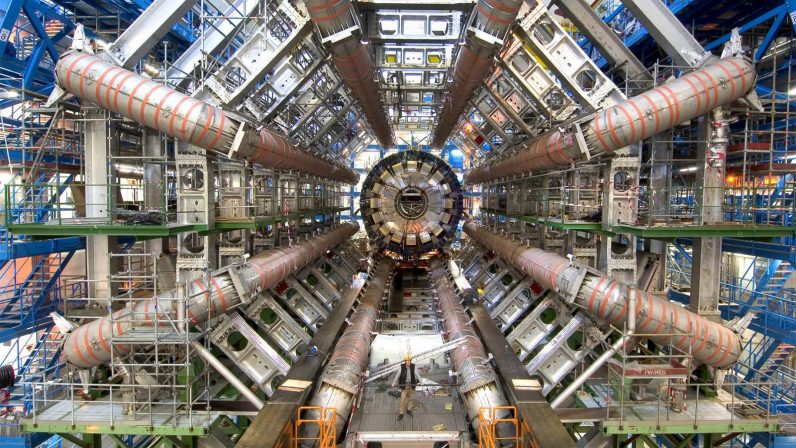 Nearly a decade ago scientists got pretty excited over a glow coming out of the center of our galaxy. They believed it to be gamma ray emissions resulting from self-destructing dark matter. Unfortunately, it turns out, the Milky Way’s glowing “bulge” wasn’t related to suicidal dark matter. It was probably just gas.

We find that an emission profile that traces stellar mass in the boxy and nuclear bulge provides the best description of the excess emission, providing strong circumstantial evidence that the excess is due to a stellar source population in the Galactic bulge. We find a luminosity to stellar mass ratio of (2.1 ± 0.2) × 1027 erg s−1 M−1 for the boxy bulge, and of (1.4±0.6)×1027 erg s−1 M−1 for the nuclear bulge. Stellar mass related templates are preferred over conventional DM profiles with high statistical significance.

The other explanation, the one we all wished were true, was that suicidal dark matter was sending gamma rays exploding out into the galaxy. Were this the case, we could finally zero in on dark matter and prove its existence.

Alas, while we won’t be unraveling dark matter’s mysteries in our own backyard – at least not by examining that particular galactic bulge – we’ve gained an amazing companion on our quest: AI.

The scientists didn’t just guess that the profile of the bulge’s glow better matched the gravitational profile of the stars near it than that of hypothetical dark matter. They used machine learning to do the heavy lifting and demonstrated through scientific rigor that it was the most likely explanation. To do so, they created a set of proprietary algorithms called Sky Factorization with Adaptive Constrained Templates (SkyFACT) to handle the huge problem of figuring out the exact specifications of a glowing field of gamma rays in space.

Another recent experiment involving gamma rays and AI could help scientists approach the issue from a different angle. Scientists working beneath the France/Switzerland border at the Large Hadron Collider (LHC ) accelerated actual atoms for the first time last month.

The LHC team sped up ionized lead atoms to near the speed of light, and observed the zany particle physics that ensued. This was the first time this had been done with an atom — previous attempts used protons and atomic nuclei. In successfully accelerating an actual atom (though stripped of all but one electron) the team believes they’ve laid the groundwork for what could eventually become an incredibly high-intensity gamma ray factory.

This, of course, means that researchers will be able to create Incredible Hulks on demand. Actually, that’s a lie. What it really does is much cooler: It gives scientists a way to create gamma rays the likes of which are currently impossible, something which they hope will provide new insights into physics problems such as — you guessed it — detecting dark matter.

And none of this would be possible without today’s modern AI techniques. The LHC produces an unfathomable one million gigabytes of data per second. Without deep learning networks to sort and sift through this data, the scientists may as well be searching for a needle in the universe’s biggest haystack.

Kazuhiro Terao, one of the physicists working on the gamma ray factory experiment, told a reporter from Stanford’s SLAC National Accelerator Laboratory:

Today we’re using machine learning mostly to find features in our data that can help us answer some of our questions. Ten years from now, machine learning algorithms may be able to ask their own questions independently and recognize when they find new physics.

Scientists hypothesized the existence of dark matter more than a century ago. And, even though it turned out the Milky Way’s bulge wasn’t the answer we were looking for today, we’re closer than ever to figuring out how to detect it.

And by “we,” I mean humans and machines working together.

Read next: 8 Android apps to ease the transition from couch to classroom