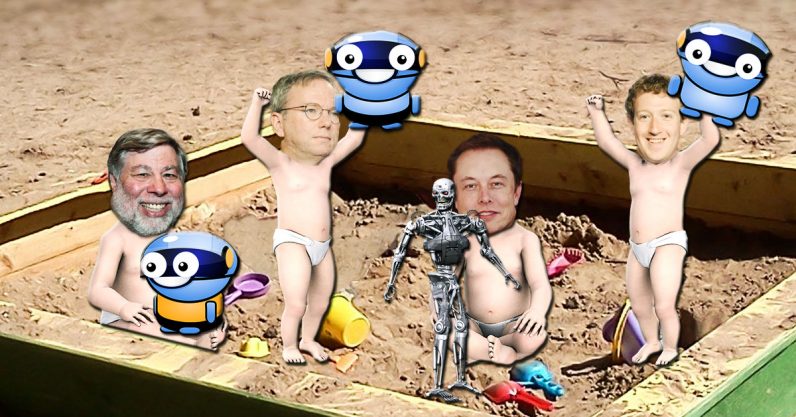 Former Google CEO Eric Schmidt today threw some shade at Elon Musk during a speech about AI, saying the Space X CEO didn’t “understand the benefits that this technology will provide.”

His statements, of course, worked like a bucket of chum tossed into shark-filled waters. Stories almost immediately began popping up telling the tale of two high-powered technology executives who disagree on one of the fundamental fixations of our day: whether or not robots will rise up and murder us all.

Schmidt made his remarks on stage at Viva Tech 2018, where, for whatever reason, he apparently wanted the crowd to think that Musk:

…doesn’t understand the benefits that this technology will provide, in making every human being smarter and the fact of the matter is that AI and machine learning are fundamentally good for humanity.

He went on to say:

These remarks are ridiculous for a number of reasons. Firstly, Musk obviously understands the benefits of AI. He’s the CEO of Tesla, a company that’s working on driverless car technology as one of the pillars of its business. And secondly, the telephone explanation is a bit dumb when you’re using it to argue against an inventor who has an entire company dedicated to boring through the Earth, and another to creating a computer-brain interface.

And those aren’t the only reasons Schmidt’s remarks weren’t helpful. I’m in the awkward position of defending someone, in Elon Musk, who I called a rich asshole earlier this week. Furthermore, Elon Musk is just as guilty of obfuscating a fairly decent point about AI by previously baiting his hook with the name of a celebrity.

I've talked to Mark about this. His understanding of the subject is limited.

To be fair, Zuckerberg had just – in a roundabout way – accused Musk of irresponsible doom-saying, which puts the social media mogul in the same annoying club. But I don’t care who started it, someone should take their electronics away until they both learn how to be the industry leaders that the unfortunately-not-very-well-understood field of machine learning needs.

Even one of the most respected and adored people in science and technology, Steve Wozniak, can’t seem to avoid making dramatic and sweeping statements on the future of AI, the kind that are guaranteed to garner headlines like “Steve Wozniak explains why he used to agree with Elon Musk, Stephen Hawking on A.I. — but now he doesn’t.”

The problem is that Schmidt, Musk, Woz, and Zuckerberg aren’t cast members on a reality TV show — what they say and do influences the future of STEM. And while great storytelling may revolve around conflict,  science and technology should be about solving problems not starting arguments.

Eric Schmidt was smart enough to run Google, he knows damn well that Elon Musk has, at least, a basic understanding of how artificial intelligence works. And Musk knows that Mark Zuckerberg is a brilliant person, saying his understanding of AI is limited is a total manipulation: everyone’s understanding of everything is limited. Plus, Zuckerberg and Wozniak probably shouldn’t be challenging Musk’s assertion that AI could be used for evil. It already is.

None of this helps anyone. In fact, it could be argued that it makes it impossible for the general public to understand what’s really going on in the field.

As a journalist, am I supposed to skip a huge story because, in my opinion, a certain person shouldn’t be spreading a certain message? Of course not, I’m obliged to inform my readers when a figure they’ll recognize says something headline-grabbing.

I just wish the experts spent more time talking about developing AI, regulating their own companies, and urging common-sense practices — and less time acting like children arguing in a sandbox.

I submit that Schmidt, Musk, Zuckerberg, and all the other experts arguing over the semantics of AI would be better served working on educating the public and government, rather than discrediting one another.