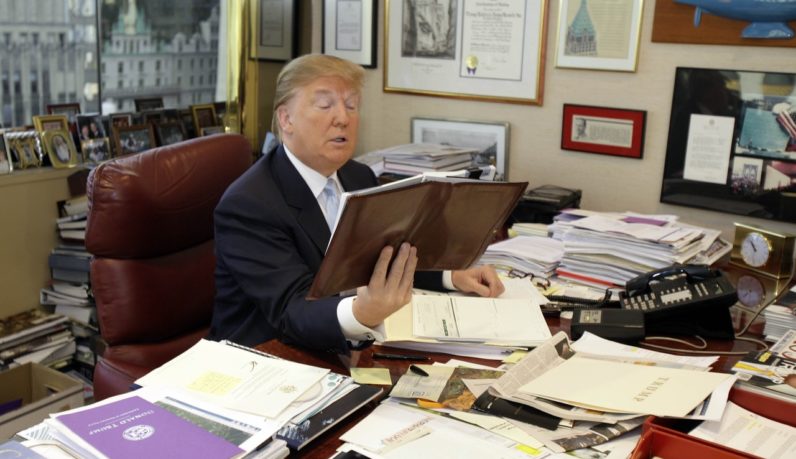 The White House last week proudly announced the formation of a committee to advise the president and Federal government on AI. It’s a shame that it’s a total sham.

Sure, the US is forming the committee, that part’s real. Here’s a link to the official document announcing the panel, including remarks from Trump’s top “science adviser” (sarcastic finger quotes, his degree is in political science) Michael Kratsios.

And here’s a direct quote from that document:

In order to improve the coordination of Federal efforts related to AI and ensure continued U.S. leadership in AI, today The White House chartered a Select Committee on Artificial Intelligence (“Select Committee”) under the National Science and Technology Council.

It looks pretty cut and dry right? Trump’s over a year late to this party, but at least the White House is finally forming a committee that will officially advise the president. There’s only one problem: the panel is chaired by people who don’t exist and Donald Trump himself.

Maybe we’re underestimating the former reality TV star, but Trump doesn’t seem qualified to advise the Office of the President on matters related to a technology that’s as complex and misunderstood as AI. That he probably shouldn’t be his own adviser should go without saying.

The document states the panel will have several offices of oversight:

This isn’t good news, because the people who are supposed to provide oversight from these offices, and the National Science and Technology Council (NSTC) mostly don’t exist. Here’s a picture of the director of the OSTP:

And here’s one of the co-chair of the NSTC and its director standing together:

In all fairness, the NSF and DARPA both have directors in place. The leader of DARPA is, necessarily, someone whose primary concern is defense — something that, perhaps, limits their ability to be totally objective when it comes to prioritization. And the director of the NSF is a French-born Obama appointee. You can accuse us of editorializing, but the chances are pretty good Trump won’t put much stock in the latter’s recommendations.

And it’s worth noting that neither organization is tasked with ultimate leadership or direction of the new panel. Thanks to the alignment of the committe, that job falls squarely on Donald Trump’s shoulders.

The person elected POTUS is, by default, a co-chair of the NSTC. Without a director or a fellow co-chair, Trump officially advises himself. This gives him unilateral control over the entire committee, with the option to defer judgment to junior members. In other words, nobody is really in charge – despite the membership including a laundry list of offices and positions tapped to participate:

You’ll notice the careful wording and lack of reference to the fact that the two main organizations charged with leading the committee have complete leadership vacancies.

So, sure the committee has been formed, but sans actual leadership it’s a waste of time and money. The White House lacks scientific expertise and, because of that, it’s unlikely to approach AI with anything but a rudimentary understanding. The same cannot be said for the governments of China, Russia, France, UK, and many other countries.

Headlines stating “And Now the White House Has Climbed Aboard the AI Bandwagon” or “The Trump Administration Plays Catch Up On Artificial Intelligence” seem at odds with the reality.

Anyone with even the slightest bit of experience with government bureaucracy (at least in the US) should know that creating committees which report directly to offices without directors is nothing more than an exercise in spending time and money to accomplish nothing — and arguably this one is a complete public relations move due to the large amounts of bad press the White House receives due to its failure to address AI. The new AI panel is nothing more than smoke and mirrors.

The White House didn’t address our AI concerns with the formation of this committee, it merely gave us another reality TV answer to a real-world problem. Trump’s administration has chosen a hands-off approach to regulation that relies on the goodness of billion dollar companies such as Facebook and Google to protect us from bad actors and wayward AI.

In its own words, the Trump administration is committed to letting Silicon Valley do whatever it wants with AI:

As we’re making great strides within the Administration, to the rest of America often the most significant action our government can take is to get out of the way. Our Administration is not in the business of conquering imaginary beasts. We will not try to “solve” problems that don’t exist. To the greatest degree possible, we will allow scientists and technologists to freely develop their next great inventions right here in the United States. Command-control policies will never be able to keep up. Nor will we limit ourselves with international commitments rooted in fear of worst-case scenarios. We didn’t roll out the red tape before Edison turned on the first lightbulb. We didn’t cut the lines before Alexander Graham bell made the first telephone call. We didn’t regulate flight before the Wright Brothers took off at Kitty Hawk. And as those great inventions took decades to fully develop, artificial intelligence will too. But today it is still in its infancy.

If we’re looking for the US government to help us keep our data safe from bad actors with good AI, we’re out of luck. And that might come back to bite us all in the ass because we’re not far away from consumer access to automatic targeting systems for civilian firearms, driverless cars with safety protocols that vary from state to state, and an unknowable number of other AI-powered threats to our lives.

It’s terrifying to know our president is navigating the future with several science-based government offices lacking a warm body in the director’s position. You don’t need to form a committee to see that.