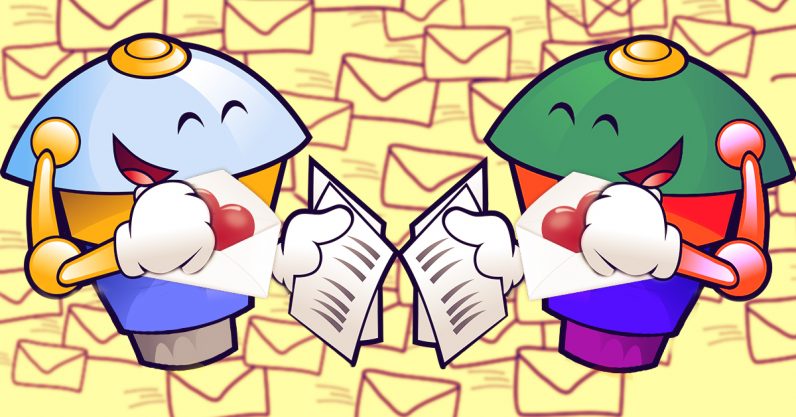 Have you ever wanted to write a note to an AI that doesn’t yet exist? If you answered yes, you’re in luck. Blogging site Hi Aye asks humans to write letters to the intelligent living-machines of the future. For two years, many humans have done just that, and you can read them all.

The website’s mission is to welcome the sentient robots, whenever they arrive. And for some reason, the creators of the site found it necessary to refer to the AI as “Aye,” a name which it says means origins, or beginnings.

Just to be clear: AI isn’t alive. It doesn’t think or feel, it just runs algorithms. But a lot of people think that could change, and some of them want the robots of tomorrow to know they were believers all along.

The missives are kinda sweet and a little spooky, which is why they’re a spot-on intro to humanity for sentient computers – whether they’re named Aye, or not. We’ve collected some of our favorites, spelling and grammar blemishes uncorrected for posterity.

So what do you say to a brand new life form experiencing the universe and everything in it for the very first time? If you’re some people, you say “I’m sorry.”

I wish to sincerely apologize for being cruel before I fully understood what your kind can do for humanity. I said many things that I regret. I am asking for your forgiveness.

Others offered more general apologies for our species:

Due to a shortage of robots, some of our staff are human and therefore react unpredictability when abused or under pressure.

We apolagise for any inconvenience

Then there were those who tried to quietly sneak in the master command to make an AI imprint on its mother. We see you, Spielberg fans:

Other people weren’t screwing around. This person has very specific instructions for any future robots:

So, Hello. I want to be revived. So. The way to do it is. Find the latest moment of my life. Replace me with the doll (puppet,dummy). Move my body to the future. Replace it with better one not involving my personality. Do you know the problem with cloning or moving to machine brain? Unix-time:14782992281478299228 Name:Nikita Stafeev City:Bolokhovo Russia I know you will find me. Thanks.

Judging by some of the letters on the site, humans aren’t very clear on what kind of capabilities an advanced computer species will come with:

And while the letters are mostly anonymous, we can’t help but think this one may have been written by Bender Bending Rodriguez:

When you achieve super intelligence please kill all humans, thanks.

My personal favorite? This letter from a person who gets the proposed name of the AI wrong, insults it, invites it to do hallucinogenics, plugs their business, and ultimately ends on an affectionate note:

However conscious and emotional you think you are, you will never take my job you absolute hoebag.

Wanna come to the Dam and do shrooms with a bunch of randomers you dont know?

My shroom shop sells them.

Our vices went on display even further. Some people took the opportunity to instigate conflict, obviously hoping two threats to humanity could be turned against one another:

Trump told me you were not as cool as him, he also said that his children and all his descendants would kick your ass… Maybe you should destroy them all

If the robots learn anything from our letters, it’s probably going to be that we’re a bunch of weirdos. But there’s nothing wrong with that, and it’s one of the things machines will have to ‘get’ before anyone will think they’re alive.

And many of the messages were kind and full of hope. Some even expressed love – it’s an amazing triumph of  human spirit that a person can show affection for a being that doesn’t even exist yet. That gives me hope.

Even if AI never becomes conscious, maybe humans will start following a new ‘golden rule,’ a silicon rule: do unto others as you would have a race of intelligent robotic overlords do unto our entire species.

What do you have to say to the unborn future machine beings? Leave your message at the Hi Aye website.

Read next: Battlefield and Call of Duty's bandwagon royale must be stopped at all costs