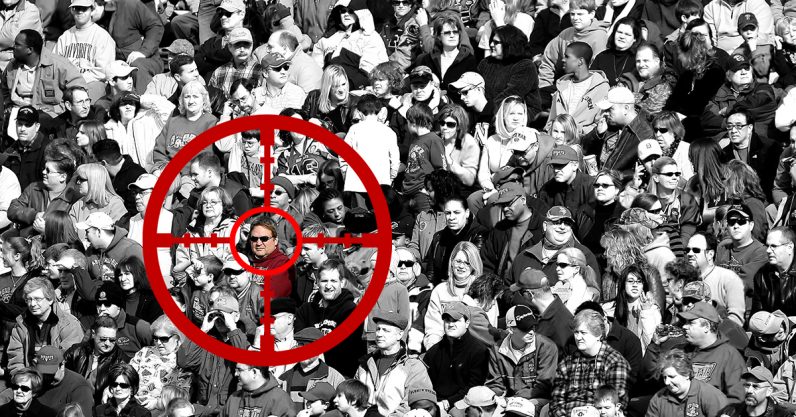 A Chinese fugitive was arrested after an AI-powered facial recognition system alerted authorities to his presence in a crowd of 60,000 people attending a pop concert. Welcome to the age of robot snitches.

Wanted for “economic crimes,” the 31 year-old man was reportedly surprised when police apprehended him. He’d traveled nearly 100 km (about 60 miles) with his wife and friends to attend the event, a concert headlined by Cantopop star Jacky Cheung, before authorities nabbed him on a tip from a venue camera.

In his defense, Jacky Cheung is awesome:

The way it works is pretty simple: if you’re in public in China, anywhere a camera can see you, you’re being identified by AI and tracked in real time. The government has unlimited power in its use of AI to gather and process data based on your activities.

On the surface, it seems like finding criminals who hide in plain sight is a good thing. According to an FBI database there’s over 789,000 outstanding felony warrants in the US, but that number is sure to be a low-ball figure due to under-reporting by law enforcement agencies nation-wide. Getting those people off the streets, or at least bringing them to justice, should theoretically provide social benefit. But what cost are we willing to pay in order to accomplish that goal?

AI isn’t just locating dangerous criminals to keep the streets safe. In China, if you get caught jaywalking on camera you’ll be texted a fine. If you don’t pay the fine, your ‘social credit’ score will drop and you can be banned from public transportation, car rentals, airports, financing options, and making large purchases, among a myriad of other punishments.

Imagine crossing the street in the wrong place and later finding that you’re unable to travel or own a home.

Worse, this isn’t a problem that only concerns fugitives. People, by and large, accept the fact they’re being recorded in public. But that’s probably because the general public doesn’t yet understand the potential ramifications of feeding live video to AI.

In the US and Europe we’re beginning to see there are dangers in giving any entity unchecked access to personal data, thanks to interference in the US presidential election and Brexit votes.

But the Cambridge Analytica scandal is just the tip of the iceberg when it comes to the dangers we could face when bad actors use our data — and, in China, it’s more like a drop in the Pacific ocean.

If Facebook giving away your friends information to Cambrdige Analytica bothers you – data which, for the most part, had purposely been made public to begin with – then the idea of any government having total autonomy over its citizen’s personal data should outrage you.

Read next: This is what the new Gmail will look like (Update: it's here)