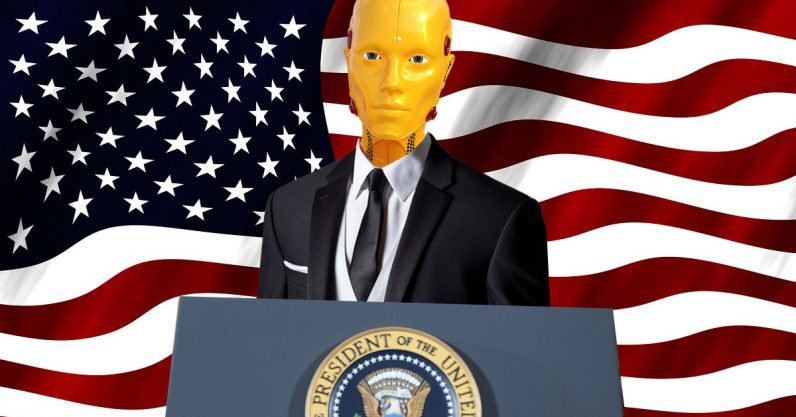 Let’s face it, the current political system in the US isn’t working. Cambridge Analytica just used our personal data to circumvent our common sense, like a thief tossing a pork chop laced with tranquilizer to distract a guard dog before nonchalantly scaling our privacy fences. It’s obvious our two party system is failing us. Here’s a better solution: let’s replace White House’s occupants with AI.

Your knee-jerk reaction may be to shake your head in disbelief, which is understandable. Aren’t we currently dealing with the fallout of a company exploiting data with AI in order to ‘digitally gerrymander’ the 2016 election? Yes, we are. But this isn’t about that kind of AI.

That AI is simple, all it does is find patterns. It doesn’t take much skill to build a neural network that finds patterns in data — that’s AI 101. It’s the humans that choose how it gets used, and that’s why the results are sometimes unethical.

And it’s not about the kind of AI that tried to run for president of Russia last year either, that was a virtual assistant. Virtual assistants will say anything they’re programmed to, which is exactly what we’re trying to fix. AI is a lot like our nation’s first president, it cannot tell a lie.

An AI president would deal only in facts. During a hypothetical campaign, the AI – which is really nothing more than dozens of neural networks working in tandem to process plain language queries – would be constricted to speaking only proven truths. If candidate AI has a tax plan it claims will reduce the deficit without raising taxes – it’ll be able to show its work on the spot.

AI also can’t be pressured into passing or repealing a policy for money. You can’t, hypothetically, groom an AI for years as your company’s lawyer and then spend millions of lobbying dollars getting them into a position to eventually dismantle consumer protections as the head of the FCC, for example.

Historically, one of the big problems with leaders is that they are selfish mammals. An artificial intelligence president could be truly altruistic. It wouldn’t be susceptible to lobbyists, special interest groups or personal desires.

You also can’t threaten an AI. There’ll never be a believable account of a computer engaging in illicit activities with foreign and domestic sex workers, or interns, because it simply can’t do those things.

With an AI in charge we wouldn’t have to worry about our democracy being stolen, sold, rigged, gerrymandered, or given away. Sure, there’s a risk that robots will become self-aware and decide to murder us all. It might be time to take that risk.

In 2016 IBM’s Watson eyed a spot in the oval office (here’s its campaign page). Maybe it’ll take a serious run at the gig again in the future.

Of course, we could ditch the idea of a robot “being” president – let’s be honest, it’s probably infeasible – and just augment the current system with an open source, completely transparent system of neural networks running on a blockchain. It could be immutable, unhackable, and bound to be honest. In this way we could provide baked-in government fact checking and real time analytics on policy discussions as they happen.

It couldn’t be any worse than the status quo.

Read next: OnePlus 6 leak shows off wooden back and headphone jack