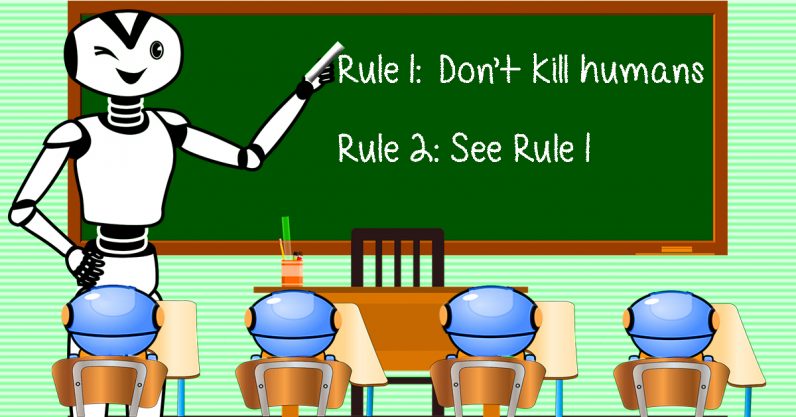 It’s been 76 years since renowned science fiction author Isaac Asimov penned his Laws of Robotics. At the time, they must have seemed future-proof. But just how well do those rules hold up in a world where AI has permeated society so deeply we don’t even see it anymore?

Originally published in the short story Runaround, Asimov’s laws are:

For nearly a century now Asimov’s Laws seemed like a good place to start when it comes to regulating robots — Will Smith even made a movie about it. But according to the experts, they simply don’t apply to today’s modern AI.

In fairness to Mr. Asimov, nobody saw Google and Facebook coming back in the 1940s. Everyone was thinking about robots with arms and lasers, not social media advertising and search engine algorithms.

Yet, here we are on the verge of normalizing artificial intelligence to the point of making it seem dull — at least until the singularity. And this means stopping robots from murdering us is probably the least of our worries.

In lieu of sentience, the next stop on the artificial intelligence hype-train is regulation-ville. Politicians around the world are calling upon the world’s leading experts to advise them on the impending automation takeover.

So, what should rules for artificial intelligence look like in the non-fiction world?

According to a report published this week by Cambridge Consultants, titled “AI: Understanding And Harnessing The Potential,” there are five key areas that rules for AI should address:

Regardless of the way in which rules are set and who imposes them, we think the following principles identified by various groups above are the important ones to capture in law and working practices:

You’ll notice there’s no mention of AI refraining from the willful destruction of humans. This is likely because, at the time of this writing, machines aren’t capable of making those decisions for themselves.

Common sense rules for the development of all AI needs to address real-world concerns. The chances of the algorithms powering Apple’s Face ID murdering you are slim, but an unethical programmer could certainly design AI that invades privacy using a smartphone camera.

This is why any set of rules for AI should focus on predicting harm, mitigating risk, and ensuring safety is a priority. Google, for example, has guidelines set for dealing with machines that learn:

We’ve outlined five problems we think will be very important as we apply AI in more general circumstances. These are all forward thinking, long-term research questions — minor issues today, but important to address for future systems:

The future of AI isn’t just a problem for companies like Google and Cambridge Consultants though, as machine learning becomes a part of more and more devices — including the majority of smartphones and computers — its effects will be exacerbated. Unethical codes could propagate in the wild, especially since we know that AI can be developed to create better algorithms than people can.

It’s clear that the regulatory and ethical problems in the AI space have little to do with killer robots, with the exception of purpose-built machines of war. Instead governments should focus on the dangers AI could pose to individuals.

Of course, “don’t kill humans” is a good rule for all people and machines whether they’re intelligent or not.