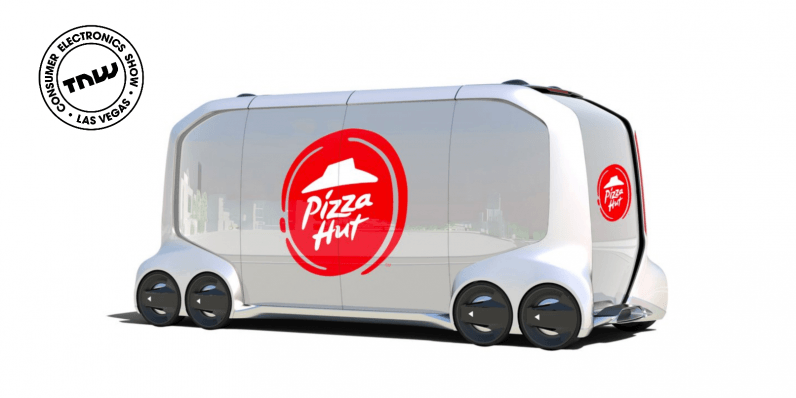 Toyota and Pizza Hut teamed up to announce a partnership that could have the latter delivering hot and fresh pizza to your door without a driver. At the Consumer Electronics Show (CES) today, Toyota revealed its autonomous concept vehicle, the e-Palette, a vehicle that may one day not only deliver, but cook Pizza Hut offerings en route.

“We are focused on technology-based solutions that enable our team members and drivers to deliver even better customer experiences,” said Pizza Hut US president Artie Starrs. “With Toyota, we are excited to be partnering with an undisputed leader in human mobility with a reputation for innovation, reliability and efficiency, as we define the pizza delivery experience of the future.”

The company plans to use existing drivers as guinea pigs this year, collecting data from its stable of delivery personnel in an effort to increase safety and efficiency in its algorithm.

For Toyota, the e-Palette is currently just a concept. The automaker revealed plans to team up with a handful of partners over the coming year, such as Amazon, Uber, and Chinese ridesharing juggernaut Didi. And, of course, Pizza Hut.

Toyota says it’s possible we’ll see the autonomous vehicle as soon as 2020, at the Olympic Games in Tokyo. US testing would happen shortly after, in the early 2020s.

It’s not just a one-trick pony, either. Toyta revealed today that each vehicle is fully customizable and offers flexibility to serve a number of purpose. Each vehicle can be reconfigured in under 24 hours, and they’ll range in size from 13 to 23 feet — the latter size being large enough to house a small store, or pop-up.

Read next: Intel will fix Meltdown and Spectre flaws in all recent chips this month