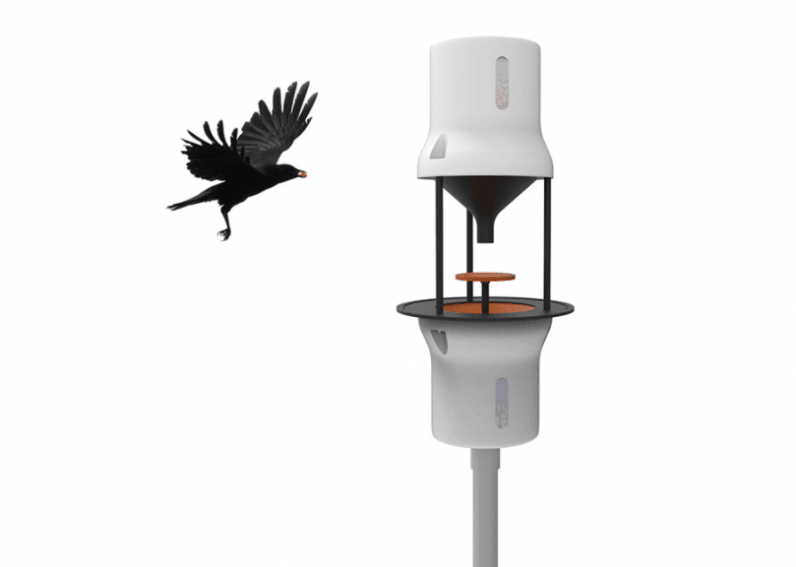 Sometimes you run into an idea that seems so ridiculous, you simply have to know more about it – even if it’s just to scoff at idiocy. In most cases, thankfully, that’s where it ends. But in some rare cases, crazy ideas follow a different curve. Allow me to sketch it out:

I’m quite obviously no designer, but the y-axis of this graph represents brilliance, the x-axis ridiculousness. Now, on the far left, you’ll notice the curve approaching a horizontal asymptote at 0 – an idea always has a sliver of ridiculousness, just stemming from the fact that we can think of ideas at all.

Moving away from there, ideas become less brilliant as they become more ridiculous – up to a certain inflection point, where perceived ridiculousness can suddenly turn into brilliance.

In a recent email announcing the winners of the Dutch Accenture Innovation Awards, which I opened out of sheer post-lunch boredom, the first entry under the category ‘Perfect Cities’ was a startup called Crowbar (Crowded Cities). The description read: ‘A smart machine that trains crows to pick up cigarette butts from the street.’ Right, I thought.

But then I thought more.

I thought of this:

And opened the link.

Crowded Cities started more or less on a lark. Industrial designers Ruben van der Vleuten and Bob Spikman came up with the idea when they noticed the tremendous amount of cigarette butts around them in a park in Amsterdam – and started theorizing a solution.

The most obvious answer was robots, but neither of them thought it would be very elegant to pull off the complex programming needed to vacuum up butts in-between bike wheels and other city nooks and crannies. So they turned their attention to birds.

“First we thought of pigeons,” Ruben tells me in their design studio in the center of Amsterdam, “which would have been great because there are so many of them in cities.” Unfortunately, a quick search revealed that there was not much known about the intelligence of pigeons, and that training them would be hard.

Luckily there’s another type of bird that loves living near humans and possesses the ability to problem-solve and learn autonomously. I can try to stretch this, but you know I’m talking about crows.

For those who are not aware of the wonderful intelligence the corvid family possesses: I envy you. You have an incredible YouTube journey ahead of you.

For those marginally aware: Most of what you’ve heard is true. Crows are currently ranked among the most intelligent species on the planet, with an encephalization quotient (fancy word for smarts) equal to that of chimpanzees.

Thanks to their understanding of causality, crows can conceptualize, create, and use tools. They play, learn from each other, and can manipulate humans into helping them out. Some types of crows can even count. No joke.

“Then we bumped into this project by a guy named Joshua Klein, and everything clicked,” Ruben tells me.

Joshua Klein is creator of the Crow Box, an open source project that’s basically a vending machine for crows. The machine is designed to autonomously train crows to pick up change and bring it back in exchange for peanuts.

“And if they can do that, we thought they could also pick up butts,” Bob tells me. But why butts? Well, look around you if you’re outside: You’ll see them everywhere. Estimates say that of the 6 trillion cigarettes we puff away every year, around two-thirds end up in the environment.

That’s approximately four trillion butts containing all the fine carcinogens, nicotine and toxins found in cigarettes that end up in some form of nature. To put that into a very clichéd perspective, those are enough butts to fill 2.5 million Olympic swimming pools. Added up, they weigh slightly less than the weight of two of these babies:

Summarizing: Cigarette butts are a serious problem. A problem that could be addressed with the Crow Bar.

“What you want is that the crows associate food with butts,” Ruben explains. To achieve this, the machine follows Klein’s tried and simple four-step process to train crows.

The first step presents the crow with food and a butt on a tray in the machine. The food is always there, next to the butt, so the crow learns to come back for more.

The second step takes away the food, and only drops it just after the crow arrives. “So the crow gets used to the machine doing things,” Bob says.

“The third step is crucial,” they tell me. In this step, the food is completely removed, leaving only the butt on the tray. The crow, used to getting food only for being there, will start to nose (beak?) around, eventually knocking the butt off the tray into the butt receptacle. The food drops when that happens.

This step is repeated until the crow learns to associate dropping the butt with getting food.

“The fourth step is the only step where humans are involved. When the crow is comfortable with step 3, a person scatters a couple dozen butts around the machine. Now the crow has to find out it can pick up those butts and deposit them in the machine,” Ruben concludes.

Once the butts around the machine are finished, the crow will go looking for butts in the ‘wild’. And presto; A beautiful machine-animal symbiosis to help out humans with a behavioral problem that’s poisoning the environment.

“But what about the crows?” you ask, as I did too. “Won’t they be harmed by picking up our disgusting toxic garbage with – essentially – their mouths?”

Well, maybe, but the designer duo is pragmatic about this. “The effect is on nature is huge, but the short contact with the butt ensures the effect is minimal,” Bob assures me. “We can regulate the machine to limit the number of crows that are trained. But indeed, we still need to do extensive research on this, because if the effects are found out to be bad for crows we have to look for another solution.”

There’s another species they’re planning to train with their project. Us. In the end, it’s a flaw in human behavior that’s causing the problem. “It’s also about starting a discussion,” Ruben says. “When we tell people about this project, and they realize how large the problem is, it changes their behavior.”

“We hope a concept like this can create a lot of awareness. Most people somehow don’t really think of throwing their cigarettes the same way they’d think of a plastic candy wrapper.” Which is weird.

Bob and Ruben still have a ways to go with their machine, before any of the above becomes a reality.

“We have all parts working separately, but not together yet,” they tell me, pulling bits and pieces of electronics out of a big plastic box. Ruben shows me the crude butt dispenser needed for the first steps of the training, and Bob talks about the difficulty of training machine learning software to tell a cigarette butt apart from a lollipop stick.

To able to complete the project, the pair is currently looking for ways to fund a serious experiment. I ask them if they’d already considered CROWdfunding, and thoroughly hate myself for it.

“It’s really a first test, and if it turns out it doesn’t work, we’d feel very responsible toward lots of people,” Bob says, ignoring my idiot joke. “It’s also not really known how long it takes to train wild crows. We’ll just have to test.”

With fingers crossed, I reached out to professor John Marzluff, a world-renown corvid expert who has written multiple books on the species, to ask if he saw anything in the project.

“I am sure crows could learn to do this. They are quick studies when rewarded for their actions. I’ve heard stories of crows picking up cigarettes elsewhere and have wondered if it had a purpose. Pet crows often steal their owners’ cigs, and Indian house crows have been photographed with cigs in their beaks. But why? Maybe just trying potential food sources they see us put in our mouths? Or perhaps they are using the spent filters as insecticides for their nests as some other birds have been found to do? So, yes they could do it,” he wrote back.

Marzluff was quick to point out the ethical implications as well though: “It is equally important to ask, should we enslave crows to do our dirty work for us? To me the answer to that question is NO. Crows have lives of their own to live and we should just marvel at their lives, rather than try to coerce them into working for us. It would be more ethical to devise a machine to pick up butts, create biodegradable butts, or better yet, train our smoking conspecifics to pick up after themselves.”

The resounding, capitalized ‘NO’ in professor Marzluff answer only adds to the brilliance of the idea, in my opinion.

The project doesn’t only look at nature for solutions to purely human problems, pitting millions of years of evolution against our puny attempts, it also combines the beauty of our most advanced technology with the strengths of some of the smartest animals on earth. And to boot, it’s not only a physical solution, it’s a psychological one as well.

Pissed off people make for great conduits of ideas, and even though the upper layer – exploiting crows – might be perceived as problematic, it’s a great way to get people talking about the underlying layer: Our own problems.

It’s glorious. An idea for a machine that trains crows to solve a waste problem we’re creating, ends up training us to be more conscious of the root of the problem, thus hopefully putting a dent in the production of waste, and eliminating the need for the idea itself.

In other words: The machine doesn’t only train crows. It trains humans.