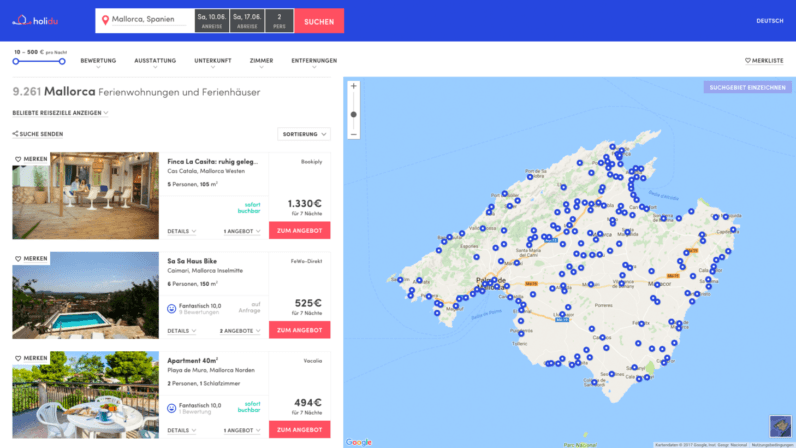 The vacation rental market is booming, and it’s largely thanks to one site in particular: Airbnb. In just a few years, it’s transformed the way people travel, and in the process ballooned into a multi-billion dollar company.

But it’s also a fragmented market. Several compelling Airbnb rivals have emerged, like Flipkey and Homeaway. It’s common to see the same property listed across different sites, with differing prices and availability.

One site that aims to bring sense to this landscape is Holidu, a German startup that uses computer vision and artificial intelligence to find and compare properties across the web.

Unlike other comparison engines, it uses AI and computer vision technology to distinguish rentals based on the photos uploaded. Holidu is able to link properties, even if the photo is taken from different angles, or under different conditions.

According to company founder Johannes Siebers, the inspiration came when he vacationed in Portugal in 2013. Siebers was looking for a property for himself and his brother, and was frustrated by how apartments were listed as available, but when he tried to book them, were actually already taken. This lead him to look into creating a comparison service, similar to Skyscanner.

Here’s the problem. How do you compare apartment rentals? As Siebers explained, “Unlike in the flight markets, where flight IDs are a unique identifier for a flight, or the hotel market, where a hotel name and GPS coordinates are very good identifiers, there is no real other way to reliably find matches of houses on different sites”

This lead Holidu to create its own image recognition AI, which Siebers claims has a 99 percent accuracy rate. “It not only recognizes ‘equal’ images,” he explained, but also identifies the room from different angles. The company also does manual recognition, for areas where there’s an element of doubt.

The technology analyzes the similarity between the images of two properties that qualify to be a match, and in addition it takes other data points as the GPS coordinates of a property into consideration. We have then defined a certain threshold, under which we do not allow for automated matching, to make sure we avoid any false comparisons. The remaining properties are then confirmed in a very easy tool that looks a bit like a “hot or not”.

The biggest challenge of this, Siebers explained, is that Holidu has a dataset consisting of 400 million images, and analysing it is a resource-intensive process.
To make this less of a “needle-in-the-haystack” problem, it has partnered with a relatively limited number of rental providers — only 200. That sounds like a lot, but it’s worth remembering there are a lot of niche providers that target specific areas.

For instance, in my hometown of Liverpool, there was briefly an Airbnb-alternative designed to bring tourists to the economically-deprived district of Anfield. While Airbnb is the biggest and most widely-known player, it’s by no means a monopoly.

Holidu has experienced rapid growth over the past few years. Since its founding in 2014, it’s actively present in 20 countries, and has a catalogue of over seven million properties around the globe. Traffic wise, it attracts over five million visits per month.

As the travel industry continues to pivot away from soulless chain hotels to the more intimate and personal experiences offered by Airbnb, it’s likely more people will head to comparison sites like Holidu to find better deals on apartment and home rentals.

Read next: This blockchain-powered phone and PC could be out next year