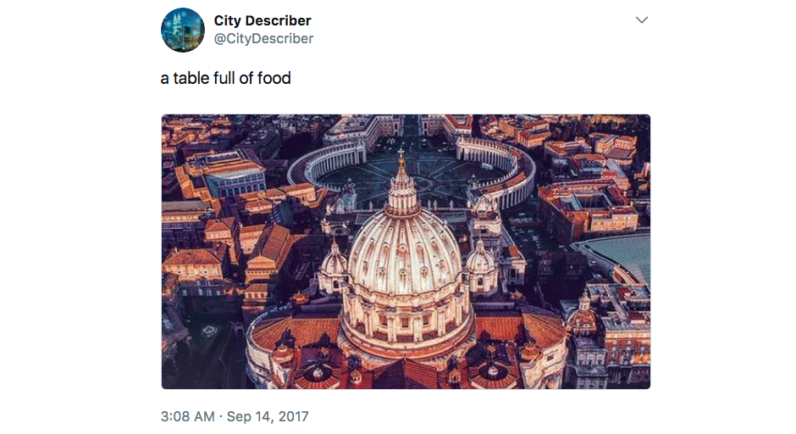 Earlier this year, Microsoft opened up its Custom Vision framework to the public, empowering researchers and enthusiasts to effortlessly build and experiment with AI models; and it seems crafty users are already finding interesting ways to put the technology to use.

Recreational AI-ficionado Geoff Boeing, who is currently completing a doctorate degree in urban planning at the University of California, Berkeley, has leveraged Microsoft’s computer vision algorithm to build a bot that captions gorgeous city landscapes.

CityDescriber, as Boeing calls his invention, currently resides on Twitter, where you can follow its awkwardly phrased visual descriptions. All images are sourced from Reddit’s CityPorn community.

As you can imagine, the quirky bot gets a lot of things right, but it does make an occasional mistake here and there (like spotting invisible people and trees).

Here are some of the less accurate ones:

a table full of food pic.twitter.com/it9320OKfS

a view of a cactus pic.twitter.com/BkV0DSinPx

a stack of flyers on a table pic.twitter.com/S8M3wNWf2g

a traffic light hanging from a tree pic.twitter.com/Am9F0ldx1T

a street filled with water and a city at night pic.twitter.com/bZ6QTDVoCx

a close up of a brick wall pic.twitter.com/fZKy9dNPwc

And here are some of the ones it actually describes rather well:

a view of the earth from space pic.twitter.com/ZQHZRW8vOC

a group of people walking across a snow covered street pic.twitter.com/TujM8ugH9s

an aerial view of a city pic.twitter.com/YaRm1oUNGg

a close up of a busy city street pic.twitter.com/S4OM6UyI7f

Of course, this isn’t the first time someone has used Microsoft’s AI to develop a captioning bot for Twitter.

For those curious to find out more about how computer vision actually works, you can learn the basics in under 10 minutes in this awesome explainer video on YouTube.

Read next: We desperately need ethical algorithms - here's why