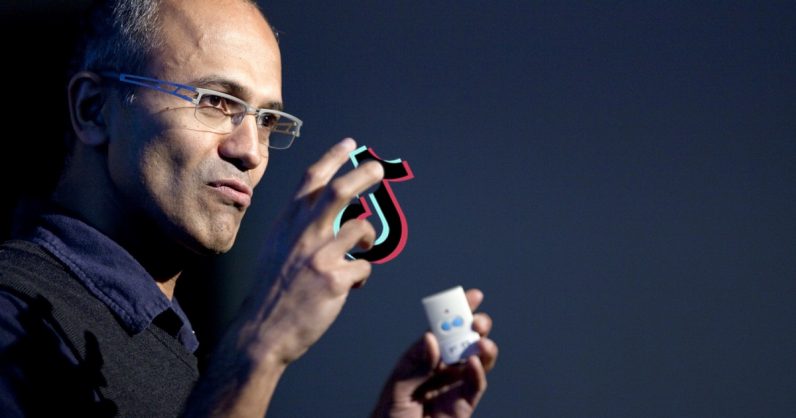 Update (04/08/2020): President Donald Trump said last night that if a US-based firm buys TikTok, the government should get a cut because it’s making the deal possible. He also gave a deadline of September 15 to finalize the negotiations; after that, he’ll ban the app.

To ban or not to ban? That’s the question President Donald Trump has been thinking about when it comes to TikTok. However, a third potential outcome has emerged over the weekend: Microsoft buying Tiktok.

A US company investing into the short video app doesn’t come as a surprising move. Bytedance has been thinking of selling TikTok to US investors to ward off security concerns for a while. And Microsoft, which doesn’t have any competing social media products, seems to be the perfect contender.

The Seattle-based company’s name as a TikTok buyer emerged on Friday while Trump was mulling to sign an executive order to ban the app, as soon as Saturday.

Late last night, the Wall Street Journal reported that Microsoft had paused negotiation after Trump opposed the deal, according to sources. The report noted that the President preferred to ban the app entirely and said, “As far as TikTok is concerned we’re banning them from the United States. Well, I have that authority.”

Recently, TikTok has taken a few steps to please the US authorities such as opening up a $200 million creators fund and promising to create 10,000 jobs in the country in three years.

Earlier this morning, Microsoft put out a blog post saying that after discussions between CEO Satya Nadella and Trump, the company will continue the discussion to buy TikTok’s operations in the US, Canada, Australia, and New Zealand. The company said it “appreciates the importance of addressing the President’s concerns.”

It’s interesting that Microsoft is not buying TikTok’s operation in India, where the app had more than 200 million users before it got banned.

Importantly, the tech giant provided a deadline for its discussions with Bytedance — September 15. It said that it’ll continue to engage with the government and Trump for conversations related to the deal.

It’s usual for a company to announce that it’s pursuing a purchase of the app, but these are unusual circumstances. More than business reasons, the deal hinges on what Bytedance and Microsoft would have to do to stop the US government from banning the app.

According to a report by the New York Times, TikTokers are already making memes and saying goodbyes to the app in case it gets banned. Some creators said that if the app is barred, that decision may incentivize more young people to vote against Trump.

On Sunday, a set of creators with more than 54 million followers on TikTok wrote an open letter to Trump saying that their version of the internet requires more than a few gatekeepers. It’ll be interesting to see how they react to Microsoft buying the platform.

Microsoft buying TikTok might not absolve the platform from its problems of content moderation. And the company might have to face many roadblocks to keep the app away from controversy.

Read next: How to use 'controversial' content to drive high-quality backlinks