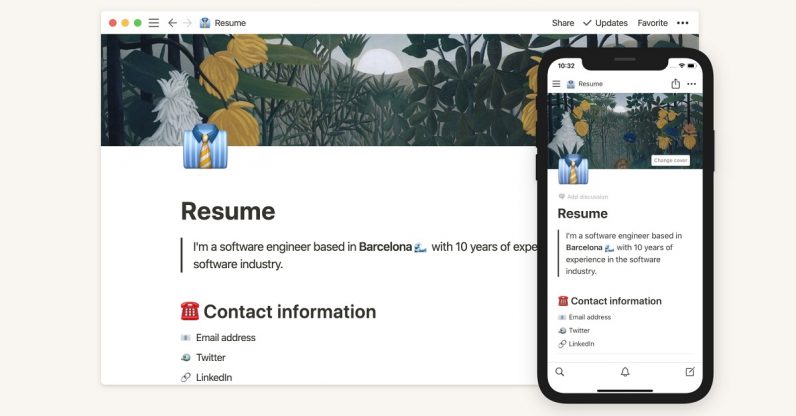 Notion, the startup behind the collaborative note-taking workplace app of the same name, today announced that it’s taking off the limits on its free personal accounts.

🤘 Starting today, Notion is free for personal use.

We used to have a storage limit on our free plan, but no more! Everyone should have access to our tools to create what they need.

Notion has a number of uses for private users, if the number of templates for personal productivity are anything to go by. Before now, there was a limit on how much you could do with a Notion Personal plan — a limit which you could remove for $5 a month. Now Notion has removed that limit itself, meaning those with free accounts can create as many pages or “blocks” (Notion’s word for elements on each page) as they like, and can also share them with up to 5 collaborators.

The company also added that it hasn’t abandoned paid plans entirely. The new Personal Pro plan, which keeps $5 monthly price, offers unlimited individual uploads and unlimited collaborators. According to the FAQ, anyone who was paying for the Personal plan has been upgraded to a Personal Pro plan.

Notion’s quickly gaining traction as a workspace app, since it’s very clean and intuitive, and its tools are up there with the likes of, say, Microsoft OneNote or G Suite. So offering its Personal plan for free is undoubtedly a move to appeal to the number of people looking for alternatives — and I’m all for that. Speaking as someone who works from home and relies on such software, options are king.

One might wonder how Notion can afford to do this given the current world catastrophe, but Notion’s actually doing pretty well under the circumstances. It just raised $50 million in funding in spite of the pandemic, and collaborative tools like the ones Notion offers are more in demand than ever given the number of people now working from home. Notably, when asked on Twitter whether this was a temporary measure, Notion responded that it’s “for always.”

To get your own Notion account, visit the site here.

Read next: Google Chrome's grouped tabs feature is now rolling out — here’s how to use it